All hands on deck with BlazeAid - Holiday Parks Downunder

All hands on deck with BlazeAid

BlazeAid loves caravanners. Not surprisingly, with so many pitching in to support farmers affected by natural disasters.
And right now, amid the bushfire emergency, the not-for-profit’s fence building and site clearing efforts are reinstating operations on large properties.
“What our teams achieve in a week can take a farmer two to three months. What’s hard for one person is easier with many,” Rhonda Butler, BlazeAid co-founder explains.
You don’t even need a trade.
“If you can thread wire through a post and talk to other volunteers that’s enough.
“What we try to do is have leaders who direct the labour,” says Rhonda.

By establishing camps at impacted regions, BlazeAid can manage large teams of volunteer labour.
Everyone camps together with their caravan, tent or motorhome; there’s no charge for the site. People can donate as little or as much time as they’re able to give.
“On the ground, you’re fed, you meet for a debrief and you’re sent off in teams to undertake different projects and return for meals.”
It’s rewarding for the volunteers donating their labour.
“Sometimes, it’s the first time they’ve ever worked on a farm. And there’s a warm sense of giving.
“These are people and they’re hurting.” 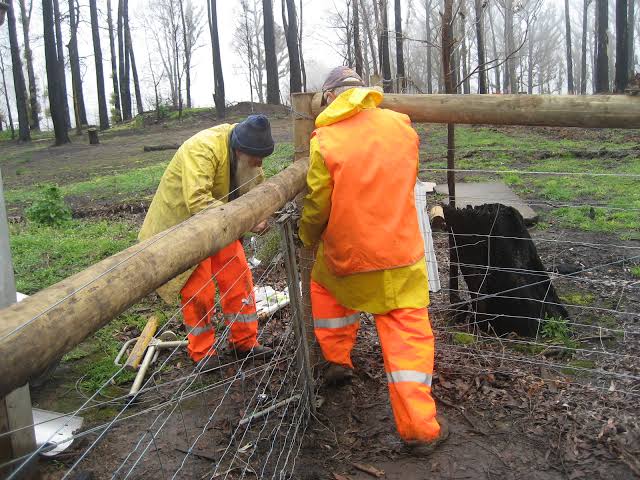 Rhonda says some farmers struggle to reach out as they’re usually so self-sufficient.
“It’s humbling for them to see so many people arriving to help. It’s humbling on both sides of the fence … we’ve had volunteers return again and again.”
The response to the current crisis has been massive, partly due to the media and the fact the fires are close to home.
“People are very impassioned because they’ve seen the fires and are affected by the smoke. In the past, fires have happened further out but we are always looking for new volunteers because people only have so much time to give.”

Rhonda and husband Kevin know first-hand the impacts of a natural disaster. The couple’s farm sustained damage in the Black Saturday fires, their recovery inspiring BlazeAid. Since then, they’ve refined the process, managing their volunteer efforts alongside farm activities.
“We run sheep.
“It’s challenging juggling the charity but we have a committee of 14 people [to help]
“Our coordinators are crucial.
“Our job is to get things rolling. The coordinators step in to organise and oversee what’s happening on the ground.”

Naturally, friendships are formed on-site.
“We had a reunion with the volunteers we were closer to—we all got together on the Murray. it’s pretty special.”
They’ve had a few couples take it to the next level.
“We’ve had a couple of weddings,” laughs Rhonda.