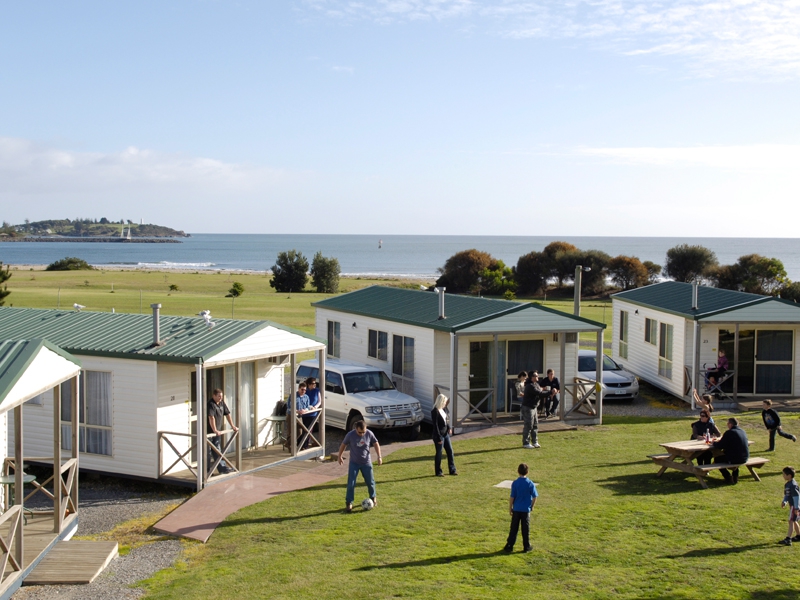 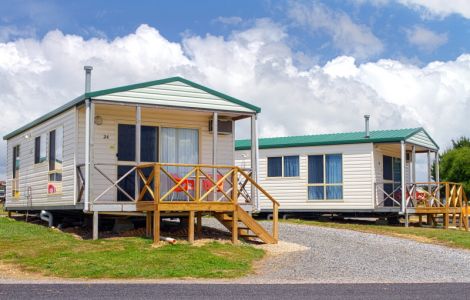 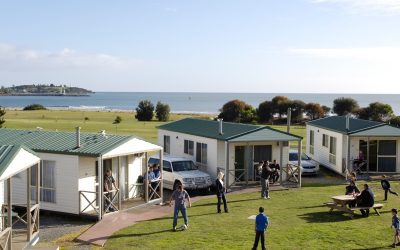 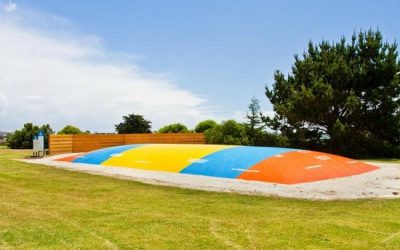 The first stop on our quick trip to Tassie was at the Discovery Holiday Park – Devonport, a really lovely park. It is in a fantastic position for camping near the Spirit of Tasmania with views directly onto the water.

There are four different cabins styles to choose from here, all of them are exceptional value. We were lucky enough to have booked a Superior Oceanview Cottage, and it really did have ocean views. All that stood between our cabin and the water was a lovely expanse of very green grass.

The cabin was great, too. Two bedrooms, to sleep six, with a very good bed in the main bedroom and two sets of bunk beds in the second. The living area was lovely, lots of room and an excellent kitchen. Discovery sure know how to equip their kitchens, I had everything there that I needed to cook our evening meals.

The cabin had a one of those delightful gas ‘wood’ fires, that we cranked up to show burning logs. Somehow just the vision of burning logs makes you feel warm. I also had those handy power points by the table so I plugged my laptop in to write this review. Such an essential thing for so many travellers these days. I did like the split bathroom, shower and basin in one room with a separate toilet. Very good indeed.

CAMPING NEAR SPIRIT OF TASMANIA AT DISCOVERY – DEVONPORT HOLIDAY PARK

The park has some excellent drive-through ensuite sites, plus plenty of powered sites. They were very busy while we were there in early autumn, and I can understand why. There is a jumping pillow which is set in a lovely open area for the kids to play and enjoy. Sometimes, for safety, a jumping pillow is in a fenced area, but this has space around it and that makes such a difference. It is close to the playground too, so the kids of all ages will have something to play on.

There are three barbecue areas, two with a laundry. Our cabin is in a circle, looking out and in the middle is one of the barbecue/laundry areas. There is another in a second semi-circle of cabins and the third is set up for the powered sites. The amenities block has the third laundry. There is no risk of having to queue for a washing machine here.

I went looking for the camp kitchen and found what looked like a small room. But this camp kitchen is very TARDIS in size, it is much bigger on the inside! Right next door is the movie room, which is open between 9am and 8pm, you can borrow movies from the office and watch them in comfort. To my mind the park is excellent and so is Devonport and surrounding areas.

We headed off to see some of the sights around the area and ended up at Mersey Bluff, a place I enjoyed visiting for a couple of reasons. There is a rather nice lighthouse there, plus it is called Mersey. I lived in the north of England for a few years about 20 miles north of Liverpool in a village called Formby. Liverpool has a Mersey River, just like Devonport. One of the main roads in Devonport is called Formby Road, and has a Formby Hotel on it! We did find time to call in to check it out. Of course it is nothing like the pubs in England, but that did not matter.

On our full day in the area, we decided to head out for a day of discovery. We drove through Burnie and on to Stanley. I had heard of The Nut in Stanley before and really wondered what it was like. At the end of the land is a large, high, flat bit of land called The Nut. Stanley township sticks to the base of it with determination. The ocean is on both sides of the town, really putting Stanley on an isthmus. We had a look around, enjoyed some local prawns and scallops there and decided not to take the chair lift up to the top of The Nut. The weather was against us and all we would have seen were more clouds, probably just a bit closer.

While in Stanley we did go through the cottage that Joseph Lyons (Tasmanian Premier 1923-1928; Australian Prime Minister 1932-1939) was born in, which was well presented and managed by volunteers. We also headed up to the hilltop opposite The Nut to have a look at Highfield House, a superb building with lots of beautiful stone barns and stables around it. This house is isolated to say the least. There is a ruin of convict quarters close by, and plenty of cows too.

We came back along a tourist route that took us along the coast where possible. In some places it does give the Great Ocean Road a nudge for stunning vistas and good bends on the road! We could not do this day out without going into Penguin.

Any township called Penguin has to play up to the name, and the good people of Penguin do not disappoint. The giant penguin is an outstanding feature in the main street. But I did like the rubbish bins along the main street, they have a family of penguins around them. Such a delightful look.

Devonport is a large city with all the shops and amenities that you would expect to find. I did find it a bit strange to be driving down a street that ended at the river, because the ships look as if they are actually on the street. It is really hard to see the end of the road and the beginning of the river from more than 50m away!

Discovery Holiday Parks – Devonport is in such a good spot that you won’t want to move on!

Book Your Next Holiday