In the mid 1990s, science postgraduate student Jenni Brammall uncovered a prehistoric puzzle piece in Lightning Ridge on a dig. And as the dinosaur bone glistened in her hand, opalised fossil fever hit.  “I ended up moving to Lightning Ridge in 1998,” says Jenni, a palaeontologist and gemmologist, who since 2004 has worked to establish a new national institution, the soon-to-be-revitalised Australian Opal Centre. 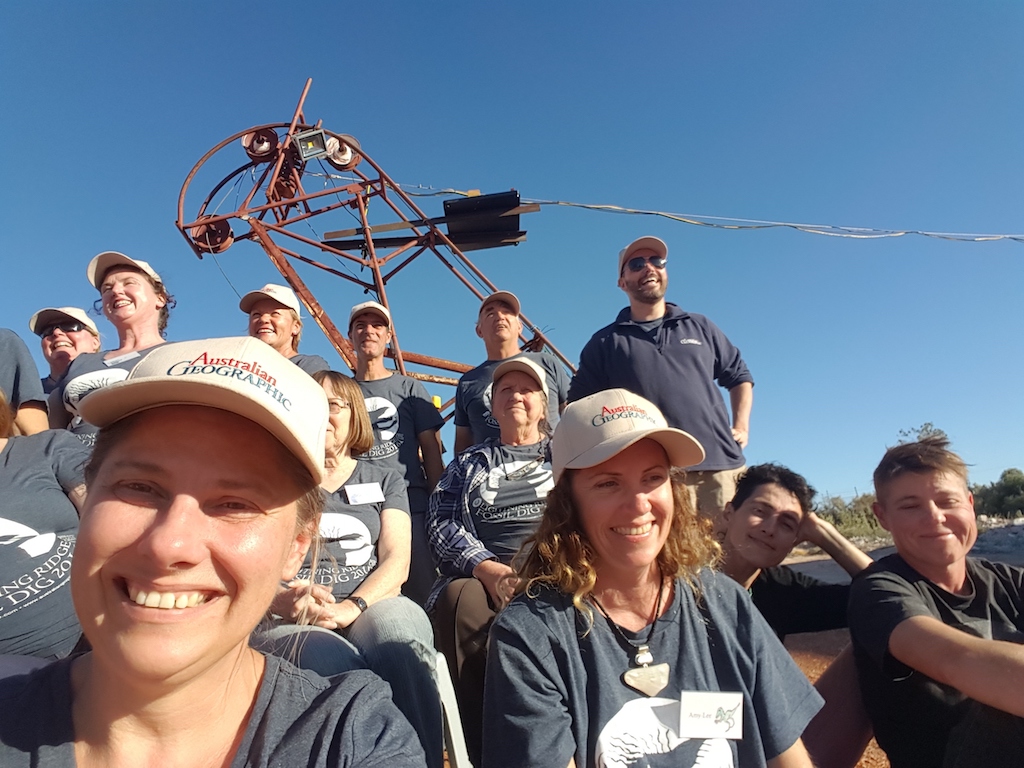 Indeed, as Special Projects Officer and formerly Manager for the Australian Opal Centre, Jenni proudly facilitated research on Weewarrasaurus, a bipedal [upright] dinosaur the size of a dog that sported a beak-like snout.

Donors Greg and Joanne Foster had entrusted the remarkable finds to the public fossil collection of the Australian Opal Centre after caring for them for 35 years.

These discoveries paint a vibrant, diverse pre-history rounded out by the opalised carnivorous dinosaur Lightning Claw. Described by scientists in 2015, this [early megaraptorid] dinosaur had large claws and air-filled bones similar to a bird.

“For a long time, the scientific consensus was that dinosaur species came to Australia on their way to dying out. But these discoveries, and others in Queensland and Victoria, prove Australia was a hotbed of global dinosaur evolution,” says Jenni.

“Opalised fossils are interesting in that they’re usually discovered by opal miners, not palaeontologists,” says Jenni. Scientists work in a loose partnership with the miners, she says.

“Many miners deeply appreciate the fossils’ significance. But they do have to make a living, so some priceless fossils are destroyed to make gemstones, or are sold off.”

It’s a bitter pill to swallow, but Jenni is pragmatic.

“We’re aware that some fossils are destroyed by the mining process,” Jenni explains. “It’s a tricky situation.

“But we would never have known of their existence if the miners weren’t here.”

Fossils donated to accredited institutions are tax deductible via the Australian Government’s Cultural Gifts Program. But with many miners earning too little to benefit from the program, fossils continue to be lost.

Other times, as with the Fostoria fossils found in 1985, scientists may have to wait patiently for decades before they can start unlocking the secrets in the bones. 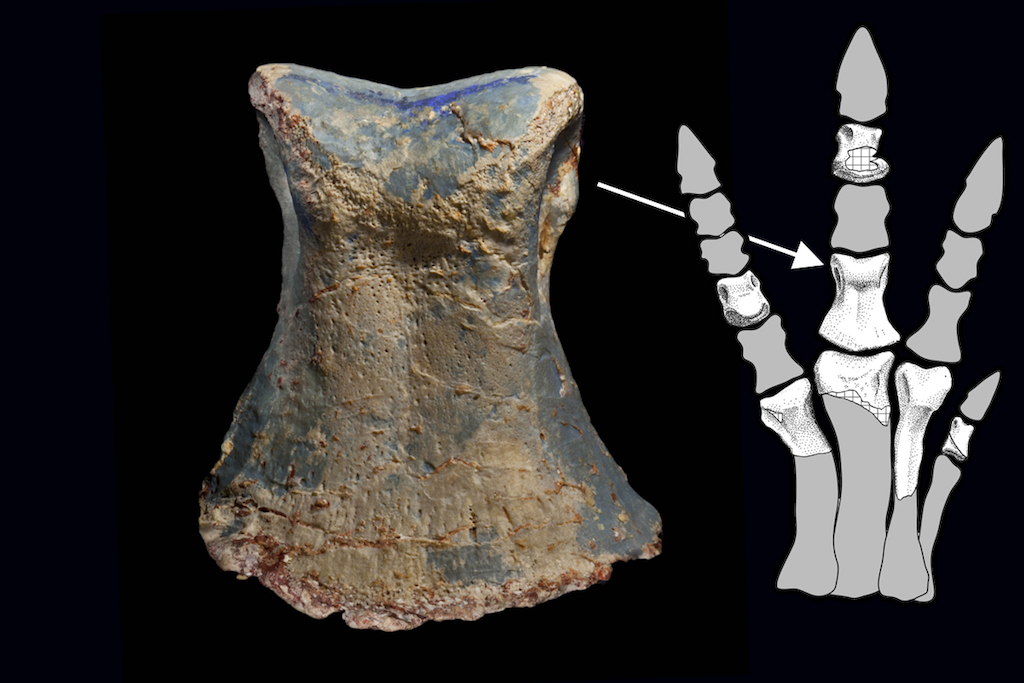 An opalised toe bone of the new Australian dinosaur Fostoria, from the Australian Opal Centre collection, with a diagram showing its position in Fostoria’s foot. The foot skeleton would have been about half a metre long. Photo Robert A. Smith.

These fossilised opals formed when plants or animal parts were buried 100 to 110 million years ago around the margins of this inland sea.

If the surrounding sediments hardened before the organic material rotted away, the remaining cavity could form a mould that filled with water rich in silica [the dissolved silica occurring in water that was ‘percolated’ in ancient rock].

The silica sometimes became opal, forming a fossil replica of the original object.

And, if the silica-rich water soaked into a bone, plant or tooth that only had partially rotted away, the opal sometimes replicated its internal structure with lace-like intricacy.

Opalised fossils found in Lightning Ridge formed in the Cretaceous period, when Australia was attached to Antarctica as part of the supercontinent Gondwana. 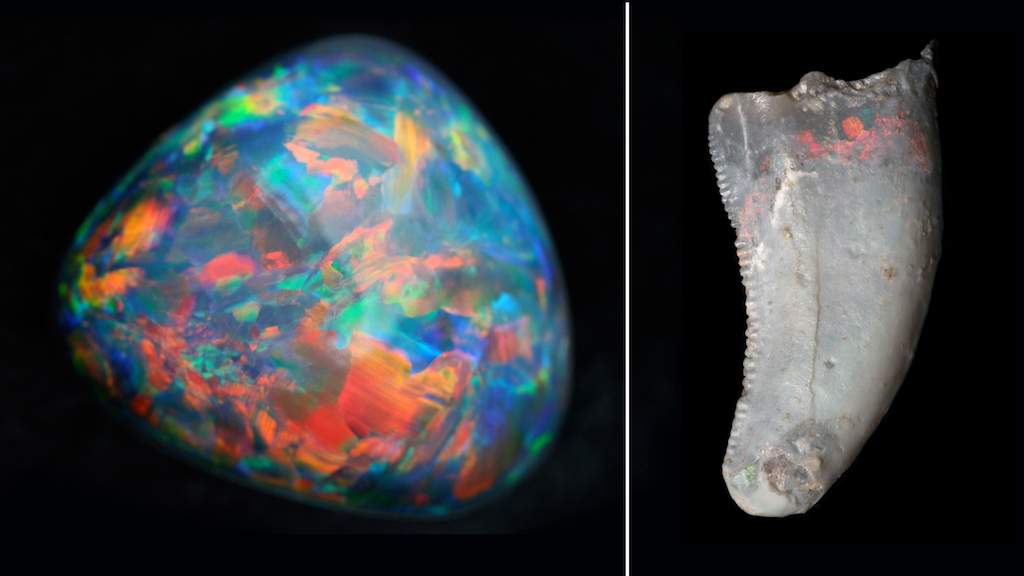 A fine black opal, alongside a 100 million-year-old opalised dinosaur tooth from the collection of the Australian Opal Centre. Photos: Robert A. Smith and Jenni Brammall.

The Australian Opal Centre is a museum, scientific, educational and cultural centre.

Jenni and her team, in partnership with the Australian Geographic Society and palaeontologist Dr Phil Bell of the University of New England, Armidale, welcome visitors on two back-to-back digs for two weeks each August.

“It’s my favourite time of the year,” says Jenni. The centre welcomes people from all over Australia and the world to uncover precious opalised fossils.

“Ordinary, like-minded people can come together and make those kinds of discoveries,” says Jenni.

“We spend time showing our Dig participants rare and precious fossils, and teaching them what to look for.”

Local opal miners, cutters and sellers share their knowledge about different aspects of the industry.

“So many people give their time. Our Dig participants gain a unique appreciation of how hard it is to find opal and come to understand that an opal miner may dig for years before seeing a return.” 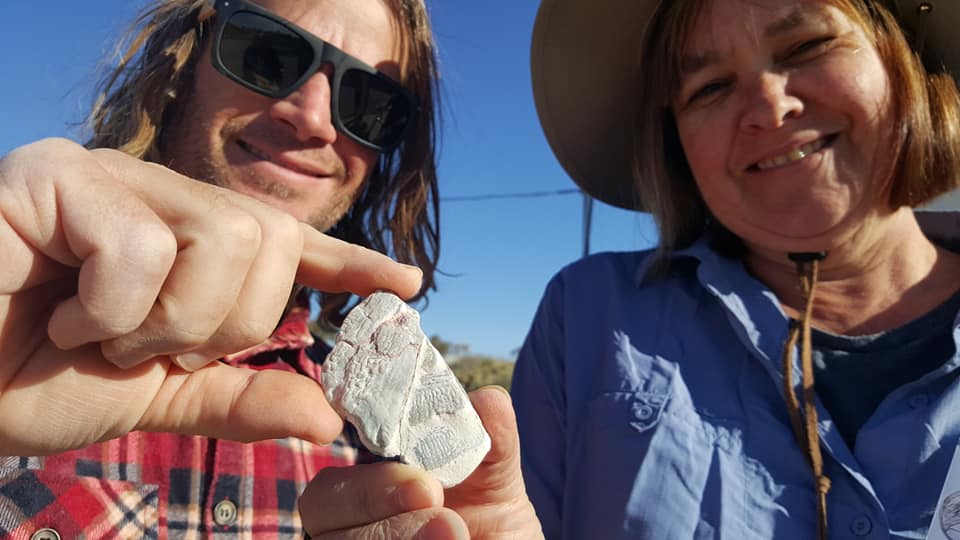 PIECING IT ALL TOGETHER

It can take months, even years, to work out the significance of a fossil find.

“Sometimes you’ll need a skilled preparator to remove host rock from the fossil. Sometimes, the fossil is already clean and clear.

“Then, you’ve got to figure out what you’ve got. It may not be a fossil at all!”

“Sometimes a palaeontologist can identify a fossil fairly quickly through their experience. Other times they’ll need to go back and compare it to a wide range of reference material.

“Once you’ve established what the fossil is, what animal or plant it came from and whether it’s something new, you can start asking questions about how it lived and the environment it lived in,” says Jenni.

“For example, a palaeontology student from the University of New England examined the pits and scratches on opalised teeth from sauropod dinosaurs.

“By comparing his results with research done on other teeth, he determined that some of the dinosaurs were browsing high in the trees, while others were eating closer to the ground, where there’s more dust on the leaves causing the teeth to wear in a different way.

“So we now understand that these species coexisted by ‘niche partitioning’ [relying on different, specific plants or resources for their survival].” 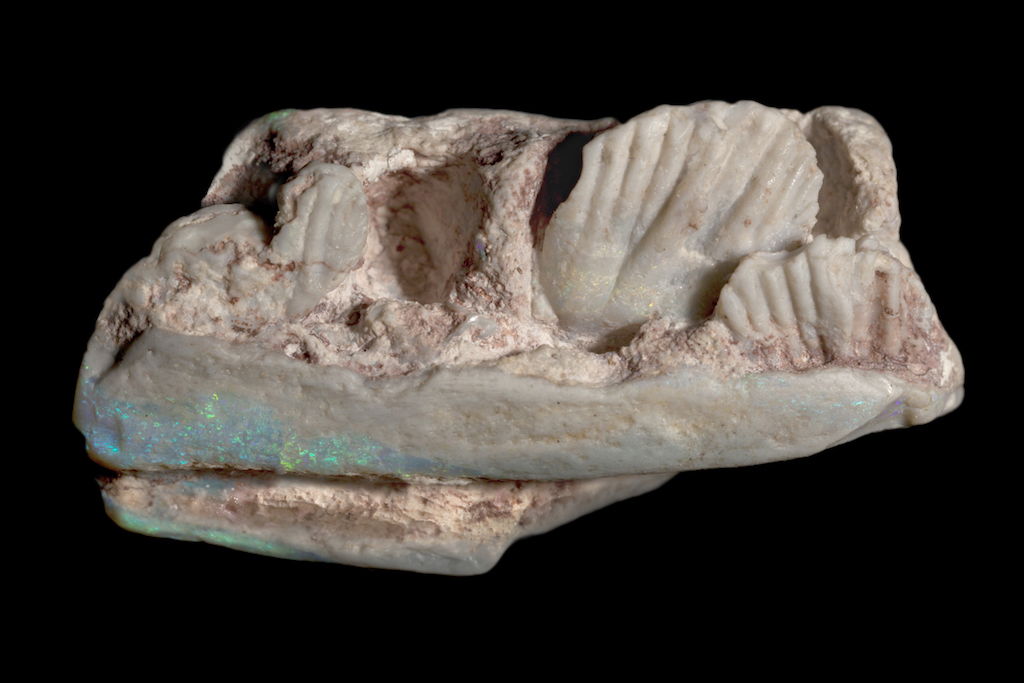 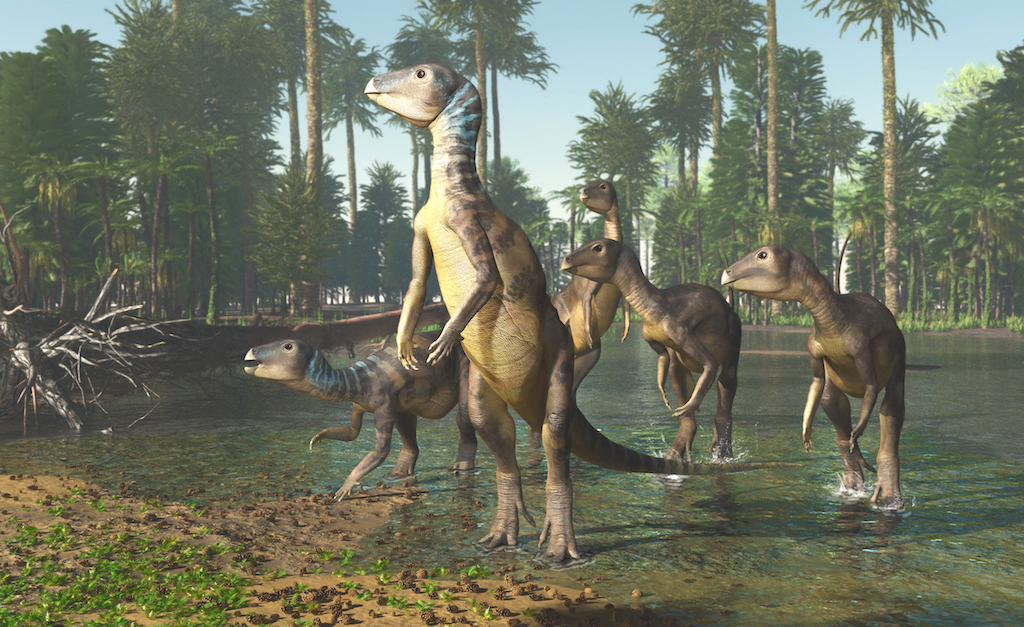 A NEW CENTRE ON THE CARDS

The Australian Opal Centre (AOC) will undergo changes, with a fabulous, state-of-the-art research and educational facility slated for Lightning Ridge.

Renowned Australian architects Glenn Murcutt and Wendy Lewin designed the facility some years ago. After years of planning and preparation, this year the AOC secured $20 million in funding for Stage 1. But Jenni hopes the centre will attract enough funds to build both stages in one go.

“It will be a world-class centre for opal-related exhibitions, research, creativity and vocational training, attracting professionals and enthusiasts from all over the world.

“It will also tell the stories of the diverse people in Australia’s outback opal-producing regions. Including the remarkable people of the opal industry, our Indigenous people, people on the land and people drawn here by opal from all over the world.”

A fitting tribute for the opalised lifeforms and the courageous, colourful characters who find them below Lightning Ridge’s wide, open spaces. Visit the Australian Opal Centre for more.