Kakadu, early in the season

“Was it a logodile we saw or a crocodile?” asks Alison, on location early in the season at Kakadu National Park.

Kakadu has been a magical word for many reasons and years. I always thought that it would be different in some way from every other national park. Well, it is and it isn’t. I’ll try and explain.

We had planned to spend three days in Cooinda and another three in Jabiru. Even then all of us (Majella, Tony, Jayne, Rob, Peter and me) thought we might be pushing it seeing everything we had read about. That didn’t last long. The park was affected, as so much of NT was at that time, from the impact of the monsoon. Roads were closed, floodways were still flooded and the Indigenous Owners were dealing with the passing of an Elder, so Sorry Business was happening.

This reduced the amount of sight-seeing we could do so we adjusted our plans and expectations but still had a great time.

Before you arrive it’s a good idea to get your Kakadu Pass which is valid for one week. We got ours in Katherine, and were told that we needed to have it with us as Rangers would be stopping us all the time to check that we had bought one. The pass costs $38, but should you have a Seniors Card, it is 50% off. Although we carried them with us, no-one asked to see them at any time. Perhaps in peak times when there are more people, more Rangers will be around to check them.

After we had booked in to the Cooinda Lodge, we set up our vans and decided what we wanted to do. Rob, Jayne, Majella and Tony wanted to take a small plane flight over Kakadu to see some of the things that were closed. So that was booked. We all threw in the things we wanted to see, what was open so were we could go and a plan came together

Our discovery of this part of the park began the next day when we went to the Warradjan Cultural Centre. This place is amazing, the display, the explanations, the information was excellent. I came out of there feeling that I had learned things and had gained a better sense of Indigenous life. Sadly, we were unable to pull out the camera but we did find a photo demonstrating Indigenous handiwork created at the centre.

We went through the shop and checked out all arts and craft work. One of the hardest things I am finding is that I don’t have room in the van to take home all the treasures I would like to. 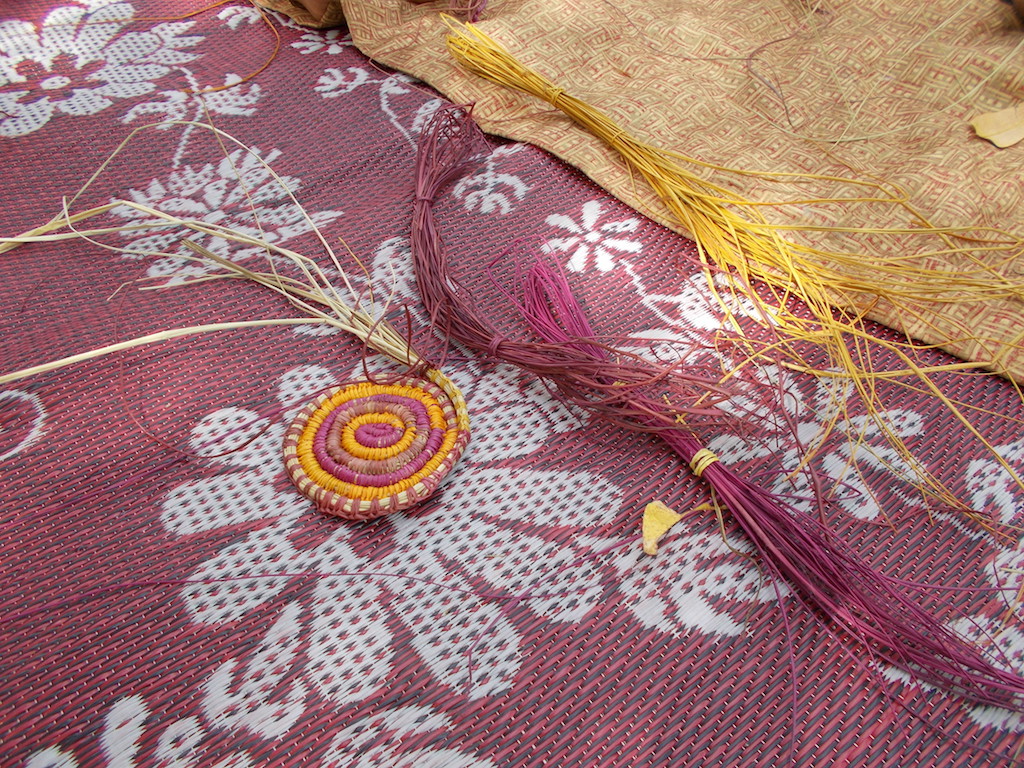 No trip to Kakadu would be complete without taking a croc tour to see how many you can spot and what they were up to. We were bussed to the jetty, put onto a boat and set sail. Before we had even left we saw one in the water. Was it a logodile we saw or a crocodile? It was a salty, silently cruising through the water, a little movement in the tail when needed, but nothing otherwise.

When it came to seeing crocs, the tour didn’t deliver as many as expected, though we saw one big boy on a bank, and he proved he was alive my opening his mouth. We got a very good view of his teeth and I was amazing how pink his mouth was. There were glimpses of a couple more, but the tour guides can’t produce crocs at will, they are either there or they aren’t.

One thing we did see was a river that wouldn’t exist in a couple of weeks. The Alligator Rivers were still flooded, which meant that it stretched over flood plains, for what seemed like miles and was at least two meters above its usual level. We went into parts of the floodplain that would be dry in a couple of weeks.

Our river cruise took us through channels, looking at birds, lotus flowers, riverbanks that were underwater. We saw a river that isn’t there for months and months. That was special. 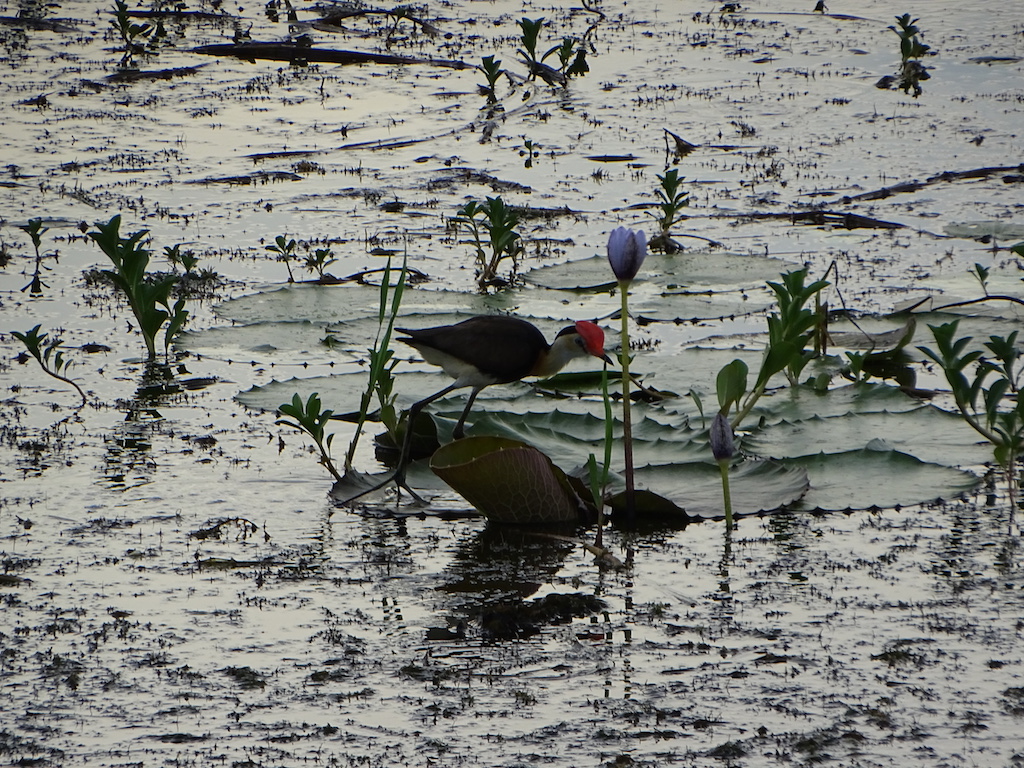 Next day was a big hike day. Following the advice from the people on reception we headed off to do a walk in the Nourlangie area. You can start at one end, walk 12km and come out the other end. This is probably a good idea if it’s cooler and you are an experienced hiker.

The alternative is to drive to a spot, do a shortish walk back to the car and still see all the major points of interest you would see doing the hike. That is what we did. We started off following the wheelchair walk which was the right way to do it. If we had started on the exit bit, I don’t know how many would carry on after that rocky climb.

The Lightning Man (Namarrkon, pronounced narm-arr-gon) was an amazing bit of art, and there was a very good explanation board about him. We walked up and looked back at an awesome rock. More walking, more rock art, and a cave area with a huge rock overhang where people sheltered in monsoon time.

After that walk, it was almost mandatory to have a cooling swim–which we did in one of the pools at the resort. 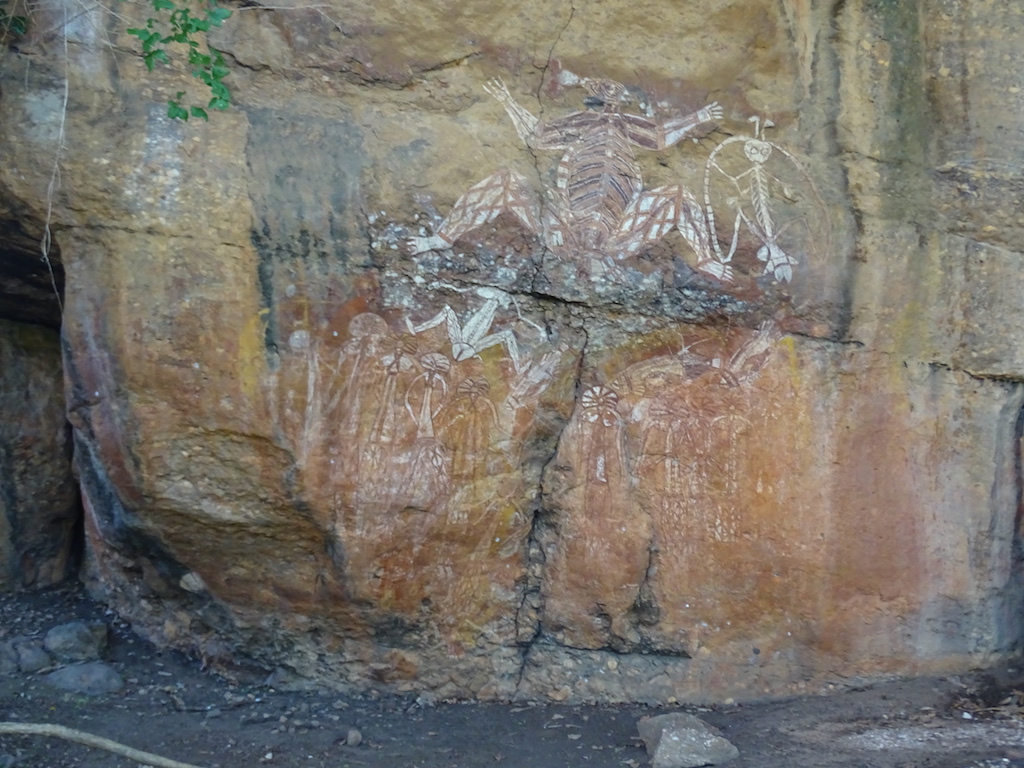 We did have one totally unplanned memorable event in Cooinda–an invasion of Green Ants. We had selected our sites and parked our car in the shade. Next morning the ants were everywhere on the car. Luckily, they didn’t seem to like the inside, so we just had to get them all off the car so we could get inside. We didn’t park by that tree again.

However, that didn’t stop them. That night it had rained a little and a branch from another tree had dropped letting leaves touch the van. Boy, did that tree have a nest of green ants! They were everywhere on our van, particularly in the awning arms. Peter spent a great deal of time sweeping the van morning and night to remove ants. When we hit Darwin, about a week after that ant episode, and we still found a couple appearing every now and then from heavens knows where. 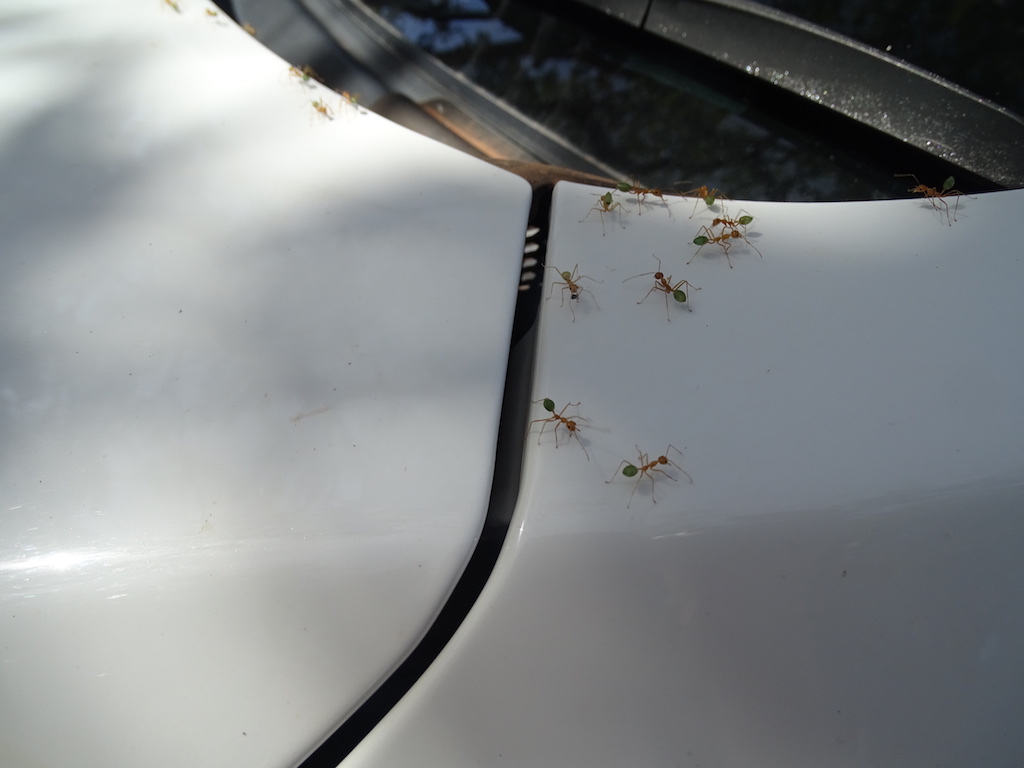 We needed a good coffee, and had been told that the best coffee in Jabiru is at the Marrawuddi Gallery, and they were right. We had the pleasure of drinking good coffee, eating Byron Bay Cookies (they are excellent) and looking at all the artworks on display.

There is a really good exhibition at the Tourist Office, which is well worth visiting. I learned more about my favourite green ants! It is good to be able to understand more about the Indigenous way of life and how they work with the land to make it work for all people, flora and fauna.

We were told that 3.02pm was a good time to be at Cahills Crossing. It seems that the crocs know when the tide turns and they can be seen laying in wait for the fish that have to jump the rocks and almost land in the crocs mouth. We, along with quite a few others and some eager fishermen arrived at Cahills Crossing in plenty of time.

We stood around and watched the tide flow inland, with people fishing but not catching. Then you noticed that the flow was slower, it was quieter. As the water became quieter so did all the people–it was almost as if we were mimicking nature. Then it stopped. The water just stopped moving. Slowly it turned and started running the other way. It really was interesting to see. Sadly, the crocs didn’t think it was worth coming that day. I think it might be that there is still too much water in the river, so it doesn’t drop far enough for the fish to be caught, or we just didn’t wait for a couple of hours to see what would happen. 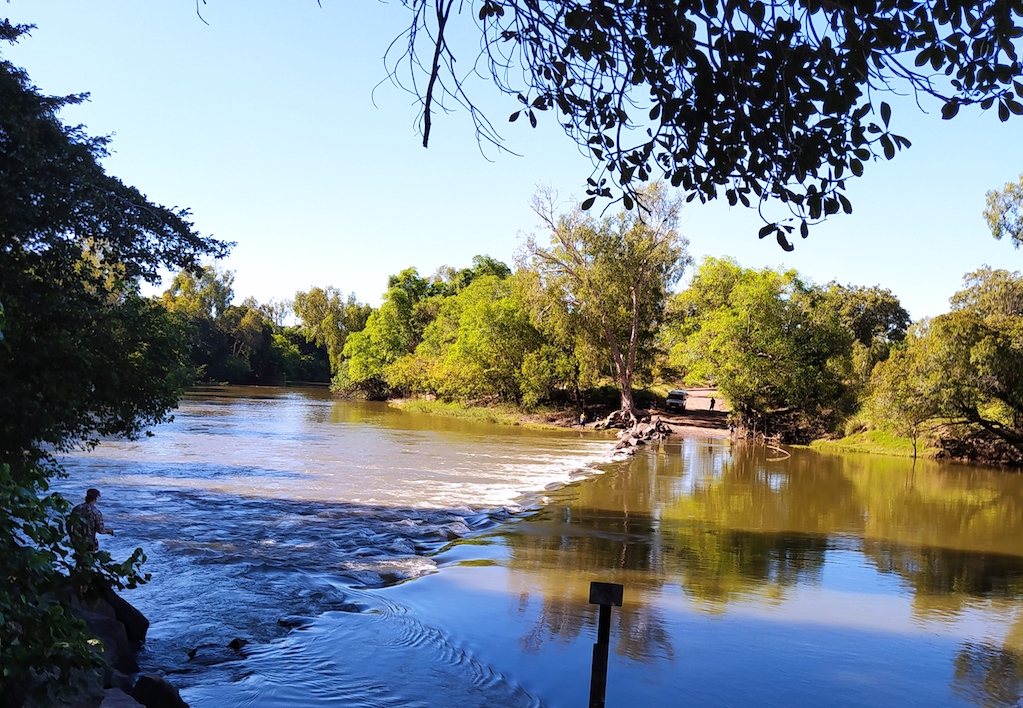 Peter and I didn’t go up in a small plane to see the sights of Kakadu by air. By all accounts it was a magnificent flight. Majella said: “We decided the only way to see Kakadu in particular Jim Jim and Twin Falls was by air.

“A spectacular flight which highlighted the incredible landscape from floodplains to sandstone plateaus.“

Having stayed for five days already, we decided to cut our stay. With limited open roads, we decided to leave and spent a night on the road to Darwin rather than drive through. It’s not a long drive, but why rush it?