Under shade by a trickling stream, rest upon a locally-made pillow at the home of Simply Tomatoes, west of Bendigo in the Loddon Valley.

“We sort of spoil them [our guests] a bit,” says Marilyn Lanyon.

“They get eggs for breakfast or, if they’re in season, fresh oranges off the tree.”

As makers of Aussie Wool Quilts-Boort, Ian and Marilyn will even measure up an under-blanket for your caravan bed. But the preserved green tomato tastings are what drives the tourists here, with the former commercial growers venturing into food manufacturing in 2002. 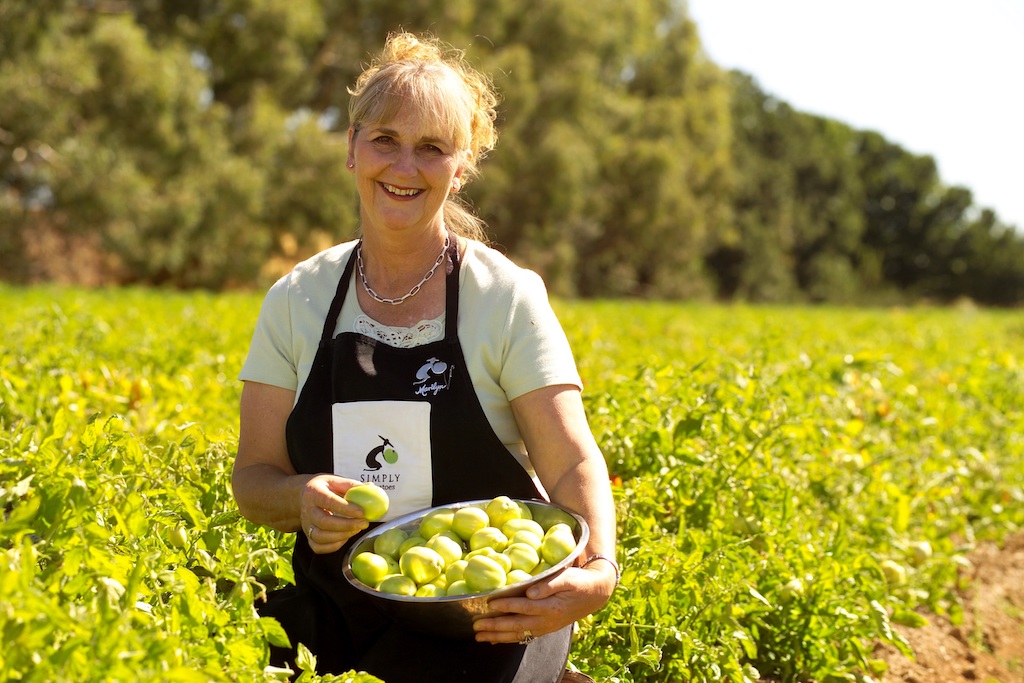 FROM GROWER TO FOOD MANUFACTURING

For years, Marilyn and Ian harvested commercial quantities of ‘605’ tomatoes—with thick skins for transport and composed for canning. The big processors, like Campbell and SPC, advised the Lanyons which varieties to grow and even sold them the seeds.

A friend and fellow grower, however, introduced Marilyn to traditional Italian pickling methods from the old country. The preserver was instantly hooked.

“I wanted to manufacture something similar, he kept telling me ‘you should, you should’, so in 2002 we launched the brand.”

Initially, Marilyn and Ian pickled green tomatoes grown from their commercial crops. By 2004, their son farmed exclusively for Simply Tomatoes, with the couple selling land to their neighbour as the boutique brand grew.

“It’s lovely to see people work around us for the first time,” says Marilyn.

The couple still sources tomatoes for Simply Tomatoes from the same patch of land. To prepare them, Marilyn soaks the tomatoes in two baths, first in a salt then a vinegar brine, before preserving them in extra virgin olive oil, oregano and garlic.

“It’s just those five ingredients, nothing else … except, to take small steps and think big!”

Marilyn hasn’t seen anything similar on the market; the couple have exported their green tomatoes internationally. Locally, it’s favoured by chefs.

“The chefs at Blackbird in Brisbane have been using it for 10 years. A few dedicated chefs love them,” says Marilyn.

But you’ll also find them in a few of the four-star restaurants in Bendigo.

“One chef teams our tomatoes with Wagyu beef. They come up with these amazing ideas—they’re true artists, the chefs.”

For many ‘drop-ins’, Simply Tomatoes—Gold winner for at the 2017 RACV Victorian Tourism Awards—is a happy find. Marilyn says they’re often up for a chat on the weekdays, offering tours up to twice a day (10am and 12pm) though bookings are preferred.

Self-sufficient holidaymakers can camp riverside for two to three days and tour the region. Overnight visitors can also trial pillows.

“We then hand make the quilts, pillows and underlays here, we have a table,” says Marilyn.

The quilts were designed in the 1980s by Shirley Halls who couldn’t find bedding suitable for her allergies. Marilyn reckons the fleece is the secret.

“Dorset Merino cross are common in Australia but the pure Dorset is specialised breed … the fleece has a 24-26 micron staple count which gives it a lot of bounce. It’s beautiful, breathes and insulates,” says Marilyn.

In addition to the quilts and pillows, Marilyn and Ian manufacture and sell therapeutic heat/cold pads from wool and wheat in 18 different body-shaped styles.