It’s a long way from Flemington to Mt Perry an hour’s west of Bundaberg. But its link to this Green Rattler is as good as gold, says local Men’s Shed president Nigel French.

Specifically, Melbourne Cup gold, with the local Mt Rawdon mine supplying the precious metal for the 2018 race.

“We had an email from the local mine (owned by Evolution Mining) calling for projects highlighting the town and the Melbourne Cup connection.”

The aim? To bring the Melbourne Cup into Mt Perry as part of its promotional tour leading up to the race.

“Coincidentally, the Victorian press reported on the imminent release of some retired trams.” 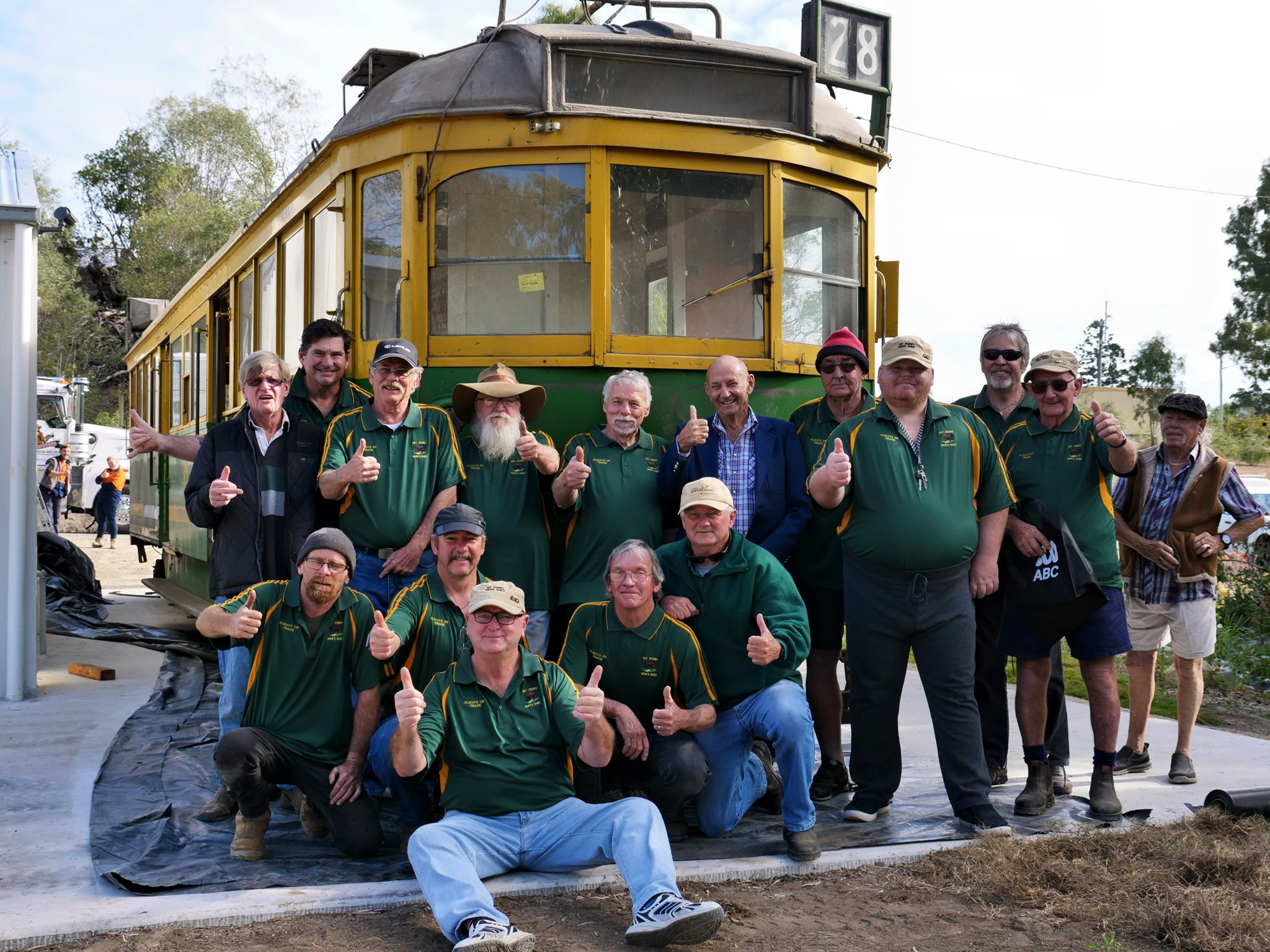 Yarra Trams was fielding interest for 134 of its trams in storage.

“[But] Rather than offer them up for sale to everybody, they made them available for not-for-profit organisations.”

The authority was targeting Victoria organisations but would release them interstate under the right conditions.

“We had to prove the connection,” says Nigel.

THE HISTORY OF THE W5 TRAM

Heritage Victoria keeps tabs on its Melbourne’s W-class trams. And this one, a W5, was built in Preston in 1939.

807 ran on the network as-made til about 1985, before undergoing modifications and returning to the tracks rated as a SW5-class.

“In 1993, it was retired and put into the depot in Hawthorne. And that’s where it stayed for 27 years …until we decided to grab it!” laughs Nigel.

PREPARING FOR THE RESTORATION

Stripped back, restorations are vulnerable without coverage.

And with W-class trams weighing up to 17-tonne, 807 also needed a suitably-engineered slab at the Mt Perry Men’s Shed on which to sit.

“The mine came good. Without Evolution Mining’s financial support the project would be dead in the water.” 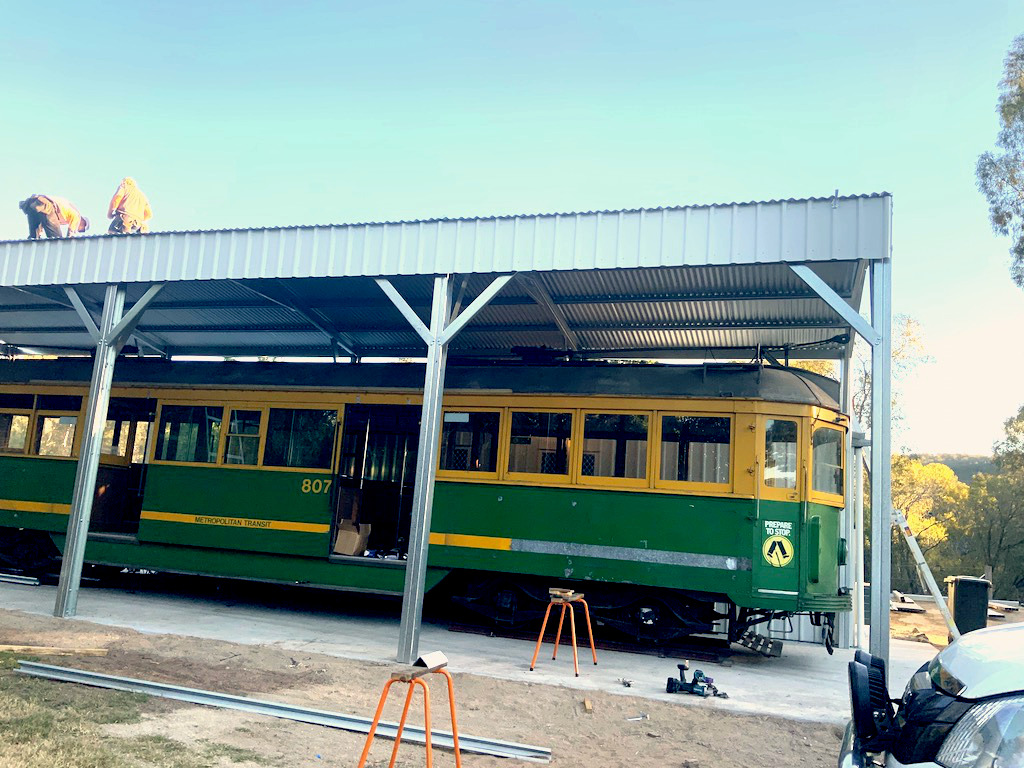 Getting it up to Mt Perry was another challenge, with Commonwealth Government Funding and an Ergon-Energex Community Fund grant covering the $15,000 fees.

“There was the cost to hire a crane to retrieve the tram at the depot and get it lifted on a truck. We had to get it up here and organise a crane at the other end—it was a pretty big task.” 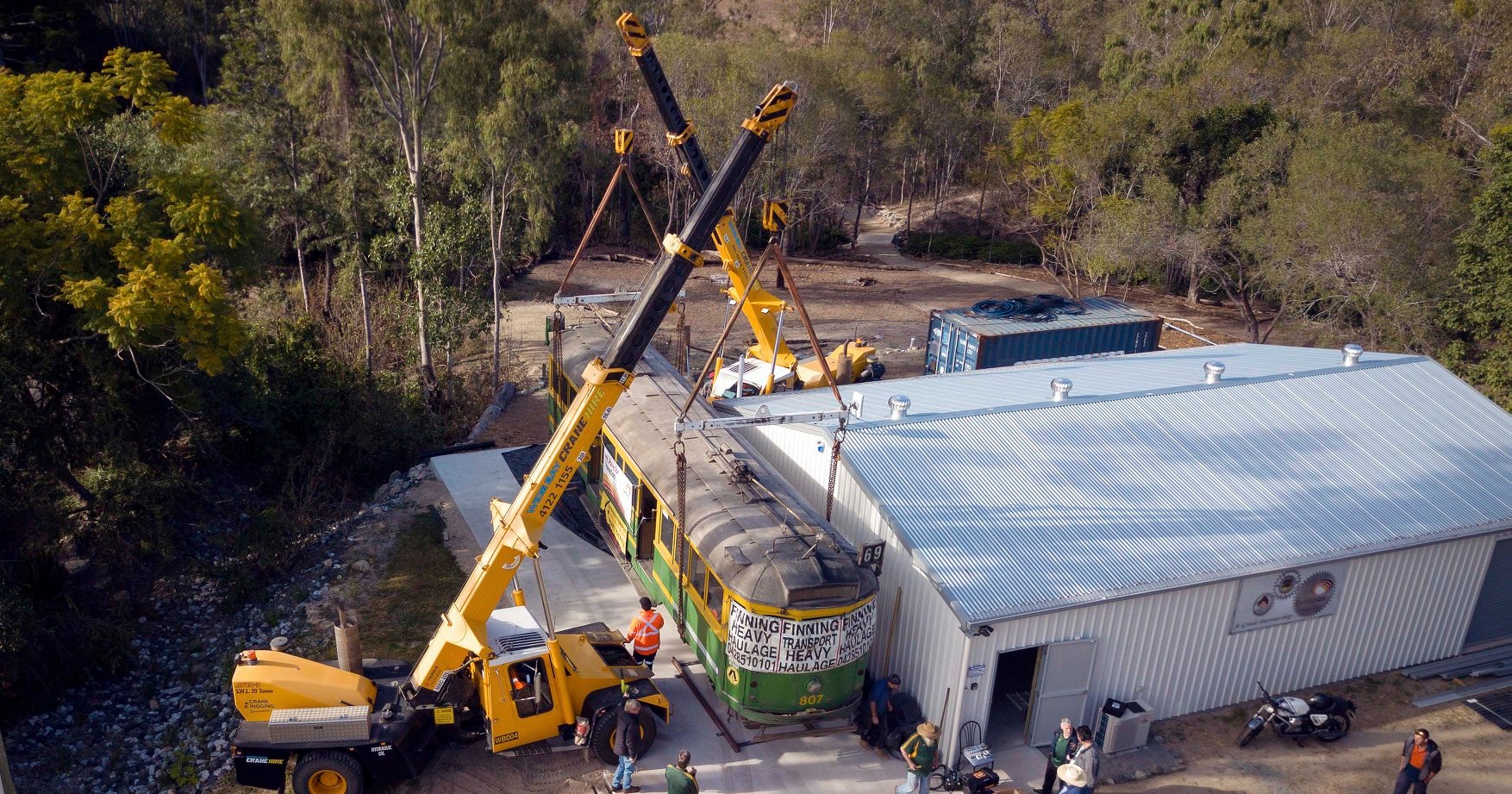 The 807 carefully lifted by crane, ready for restoration. Image courtesy of Ergon Energy.

Fifteen members comprise the Mt Perry Men’s Group, though volunteer hours are down due to COVID-19.

“We have six or seven hard-core fellows who are involved, and we’re lucky, we have got guys with different skills.”

First on the agenda is stripping back the paint.

“Our project manager Tom is a skilled painter, he will make sure the outside stuff is done right.” 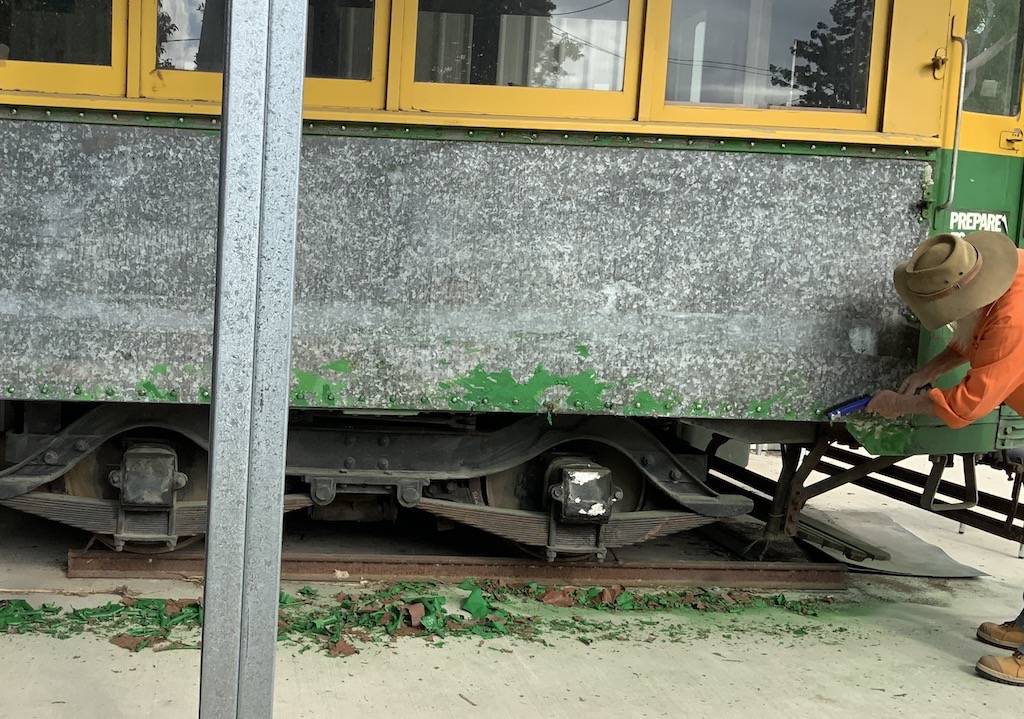 In its later working life, tram 807 acquired steel doors in its SW5 conversion. But they were removed prior to sale. This fits in well with the Mt Perry Men’s Shed plans to reinstate 807 to its original W5 configuration.

“I managed to contact an enthusiast in Victoria experienced with tram renovations. He sent me through a copy of the tram doors.

“We were very lucky. Because of the virus, it is difficult to get information.”

A local tradesperson, Sam, has offered to fabricate new doors.

Nigel sourced drawings from enthusiasts to assist with the restoration.

Visitors will learn about the local mine and the Melbourne Cup connection via a digital kiosk.

It will also celebrate local artists, with a tribute to Mount Perry local and acclaimed fabric designer Florence Broadhurst headlining the display.

While capacity to serve light refreshments tops the wish-list.

“We will get it electrified, that’s our next challenge.”

In the meantime, Nigel will work with Council to finalise its eventual home.