“In summer we have great visibility.

“You can actually see it [the restored habit] from the top deck, and snorkel out from there,” Sophie explains.

The research tested the soft corals and sea sponge growth in four scenarios, varying in depth, light and water temperature. 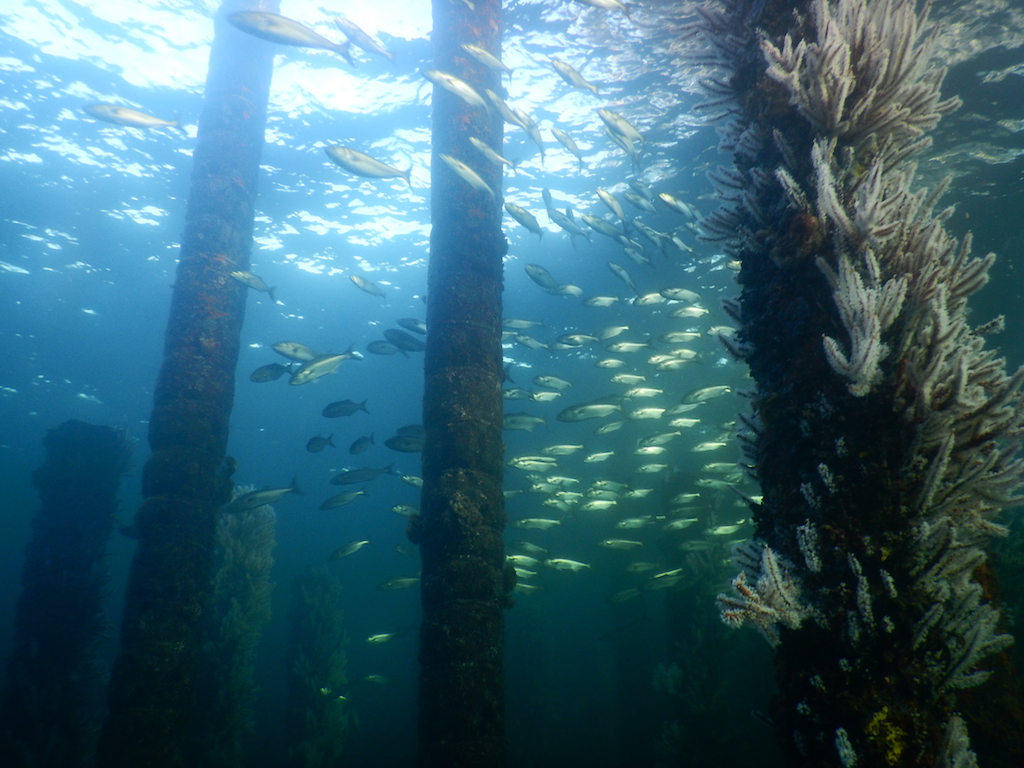 When it came to defining conditions for the four scenarios, Sophie drew her own observations at the Jetty.

“Most research focuses on hard corals. But in terms of ecological support, they [soft corals and sponges] provide the same food and shelter for organisms as hard corals.

“They are just an overlooked habitat,” Sophie explains.

Busselton Jetty conducted the tests on six of its 500 piles following a routine restoration.

Following the planting, Sophie examined how the ecosystem recovered as a whole, and how individual coral species responded.

“Removing the coral [to clean the piles] is quite a brutal process.

“Many sponges and corals will spend a lot of time repairing themselves instead of growing larger.

“The dominant Carijoa coral could successfully repair itself and also grow—it does a great job of finding that balance,” says Sophie.

“If you see the white fluffy branches, in between them creates quite a sheltered environment.

“It slows down the water. And all that slowing down creates a bit of a safe haven for fish to stay,” says Sophie.

Although classed as ‘dominant’, the Carijoa actually supports other animals in the Jetty’s environment.

“The larvae [from other species] need a gentle flow [to attach itself to the piles]. Otherwise, it’s just washed away,” Sophie explains.

To optimise the recovery, Sophie has been in deep discussion with the commercial divers undertaking the pile repairs.

“They are really involved; so they will be responsible for carefully removing the corals and storing them in little crates in the seabeds.

“Our volunteer divers will do the rehabilitation once the poles are repaired,” Sophie explains.

PART OF A BROADER OVERALL PROJECT

Sophie’s research was funded as part of a surprise grant from the Mindaroo Foundation, which will also fund a habitat building project.

“We’re seeking permits to install man-made objects on the seabeds. Things like domes and cubes that will favour different kinds of marine animals.

“The other portion will help finance an interpretation area at the end of the jetty, which will cover several topics about Geographe Bay, including humpback whales, seagrass meadow and orcas.

“This project is part of larger works building new food and beverage facilities on the Jetty.

“We’re just going through the design phase now. It’s due to finish in just a few years.”