And as their first brandy batch matures (a nod to the region’s past), their gin earns international acclaim, just 15 months later.

“We can access a lot of grapes here. We salvage the skins.

“After they’ve [wine producers] pressed out the grapes there’s still a lot of sugar and alcohol remaining. We distil that, and that’s our blank canvas,” says Jon.

The couple flavours the base with botanicals sourced locally and abroad.

“We like to forage. A lot of Australian distillers are doing amazing things with Indigenous flora; what we are doing is blending in flavours iconic to the Barossa.

“Many old houses in the Barossa have big gnarly peppercorn trees so all our gins are blended with peppercorns.

“We’re also just next door to the Riverland so we use fresh citrus. Lots of fresh grapefruit peel.

“Locals just turn up with boxes—although some might expect a quick profile,” says Jon.

The passionate owners were pleasantly surprised by their win at the South Australian Tourism Awards.

“Our main premise is the quality of the gin,” says Jon.

“The tourism aspect for us is showing that what we do is real. There are so many brands that don’t exist beyond the label,” Jon explains.

“And in the Barossa, there is an open and willing audience.

“We could have done the same in a factory in Adelaide but we wanted to share the process.”

DESIGN YOUR OWN GIN AT SEPPELTSFIELD ROAD DISTILLERY

From every point within the facility, you can see the distilling process behind a beautiful wall to ceiling glass panels.

You can tour the stills or even design a blend.

“Christine leads our tours ranging from a half-hour introduction through to whole day experiences blending gins and pairing spirits to create unique cocktails.”

“She’s instilled a great culture in our team. Both in terms of what we’re doing here and what’s on nearby. What else is there to see in the Barossa; what might be new.

“The feedback we get is great.”

Although locals, Jon and Nicole were in London when they purchased the sloping property on Seppeltsfield Road four years ago.

Jon was working in finance though trained musician Nicole was forced to fly back and forth home to secure work with the Adelaide Symphony Orchestra.

Seeking a new chapter, she toyed with many ideas before settling on distilling gin.

Whose idea it was is up for debate but within four months they’d bought the property, with Nicole (now lead distiller) earning accreditation at London’s Institute of Brewing & Distilling.

“It’s nice for Nicole as this is her home; it’s a privilege to do what we love and share what we’re doing.” 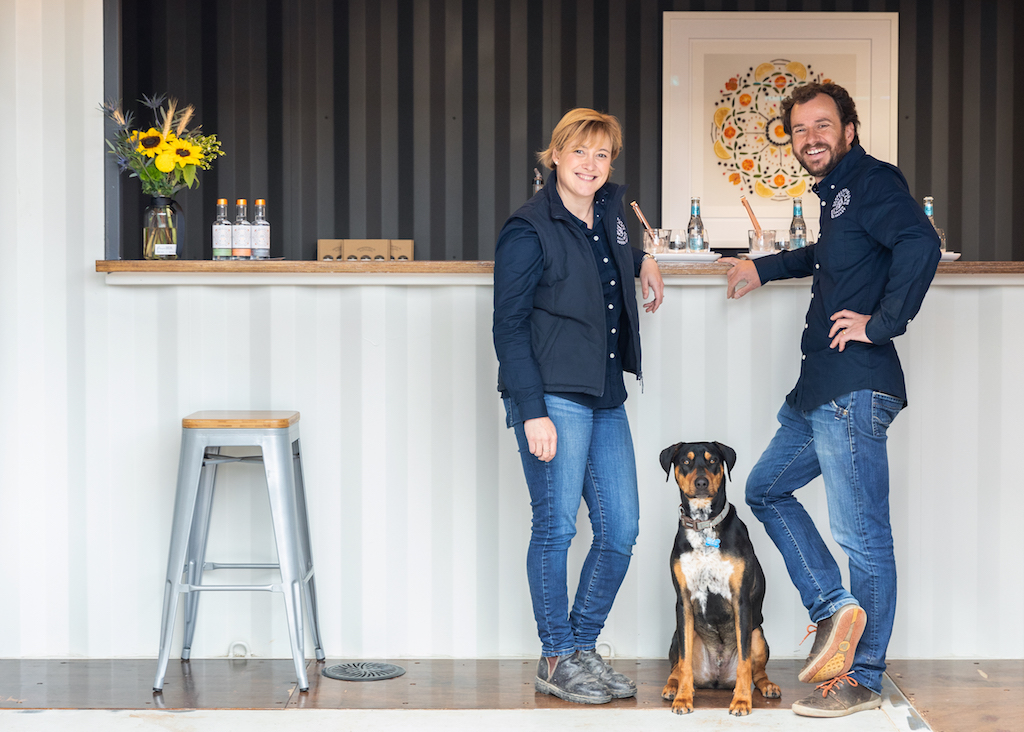 Although a tricky site to develop, Seppeltsfield Road and its slopes loaned themselves beautifully to the distillery’s striking design incorporating shipping containers.

“Spence is a good mate. He gave us a hand between filming the Bloc. He was pivotal in the deck’s design,” says Jon.

“We now have this beautiful modern exterior clad in Western Red Cedar that will fade over time and blend into the environment,” says Jon.