But 130 years ago, it was a different scene.

Instead, crushing and grinding rocks echoed through these hills, with golden bullion production in full swing from the early 1870s till 1909.

Daily, excited prospectors headed up winding roads to value their finds at the Wilson and Ritchie Battery.

“Miners brought in their ore, it was weighted and assayed. They could either process it on-site or sell the ore,” says Louise Halsey, Conservation Coordinator for the Adelong Falls Heritage-listed Gold Mill Ruins. 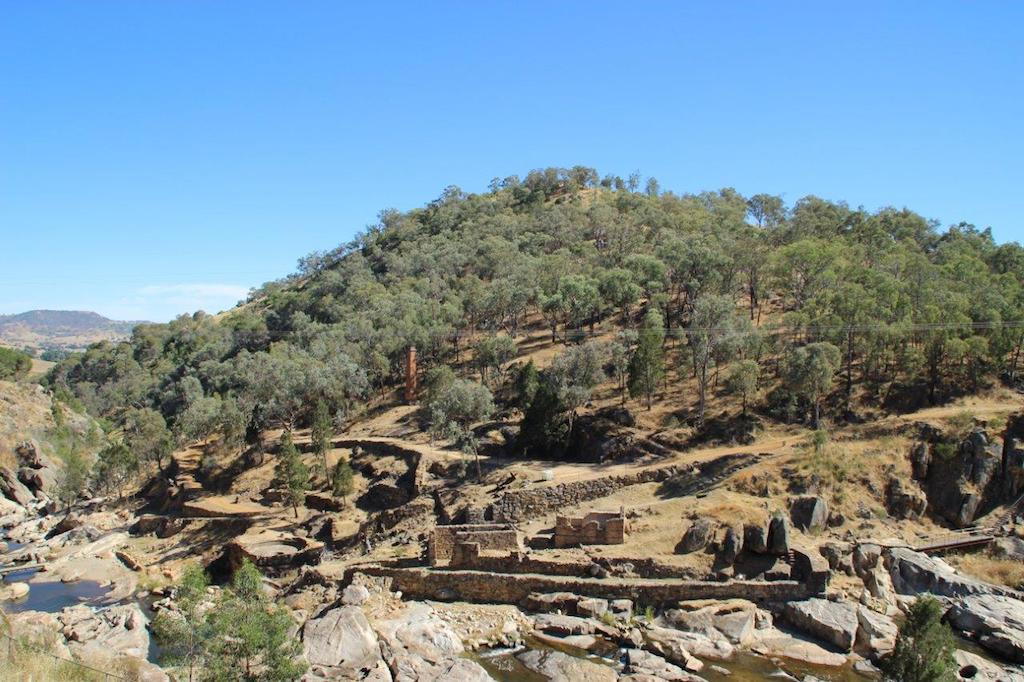 The Wilson and Ritchie Battery wasn’t the only mill tapping into the Adelong creek’s capacity. But it was a big one. And its ruins spanning 200 metres across Adelong Falls are unique.

“The site was opened 1872 and it was quite significant.”

In fact, it used two water wheels to power its operations.

“The owners purchased another water mill and bought the rights upstream to power the rock breakers,” Louise explained.

“It processed more than 26 tonne of gold … but [by 1909] it became very difficult to extract because of the type of rock we have here.

“Even with the machinery available we have today, it is still hideous rock to break,” Louise explains. 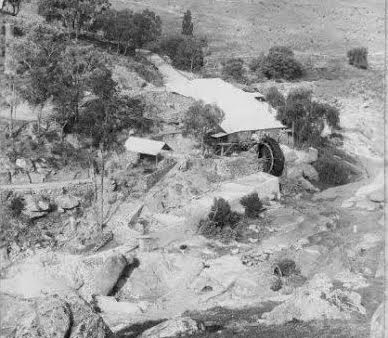 The Wilson and Ritchie Battery operating circa 1890.

FROM THE MUSEUM MODEL TO LIFE-SIZE RUINS

The main street of Adelong is Heritage-listed.

And you can inspect machinery of the reefer battery and a site scale model in town at the Adelong Alive Museum.

Via a paved and gravel path you can reach the ruins. Here, interpretative signage reveals how the gold processing mill operated on a self-guided walk.

You can also see the entire ruins from an accessible viewing platform adjacent to the car park.

Other facilities include toilets and picnic shelters, a large shelter provides space for group gatherings.

It was a tough life. Labourers toiled in hot, unforgiving conditions, operating stampers and amalgamating gold with mercury at different stages till it was processed to a fine dust.

In the centre of the ruins is the circular buddle, which was powered by the water wheel.

“It operated like a giant panning dish to extract the pyritic ore from the tailings,” Louise explains.

Once the gold-bearing ore was reclaimed from the buddle, the furnace helped to extract the gold and release the mercury.

“The gold was melted into ingots, from the mill it was stored in the gold office in Adelong ready for transport via Cobb and Co to the Sydney Mint.” 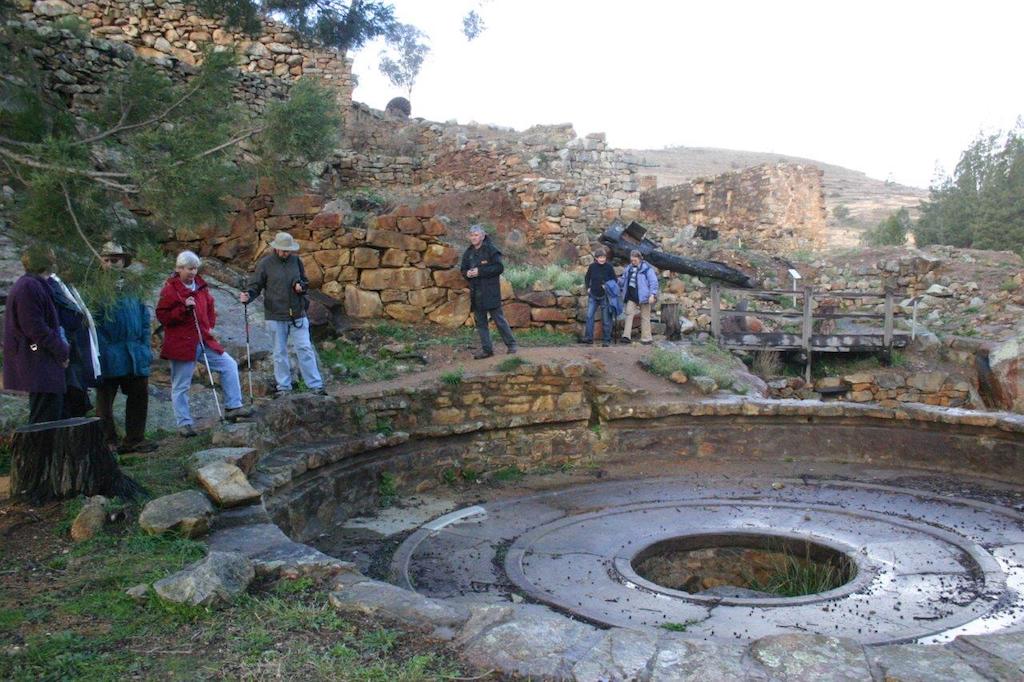 HOW THE RUINS SURVIVED

How so much of the Adelong Falls Heritage listed Gold Mill survived when others didn’t is intriguing. After all, in 1930 few cared for the decommissioned battery’s posterity.

“The site was blown up to make pig iron.”

But the builders of the mill knew about how to use stone.

The sheer size of many rocks, the extensive drystone walls, the location and the use of lime mortar protected the ruins.

“There is no cement used in the ruins other than what was done in 1988 during the Bicentenary,” says Louise. 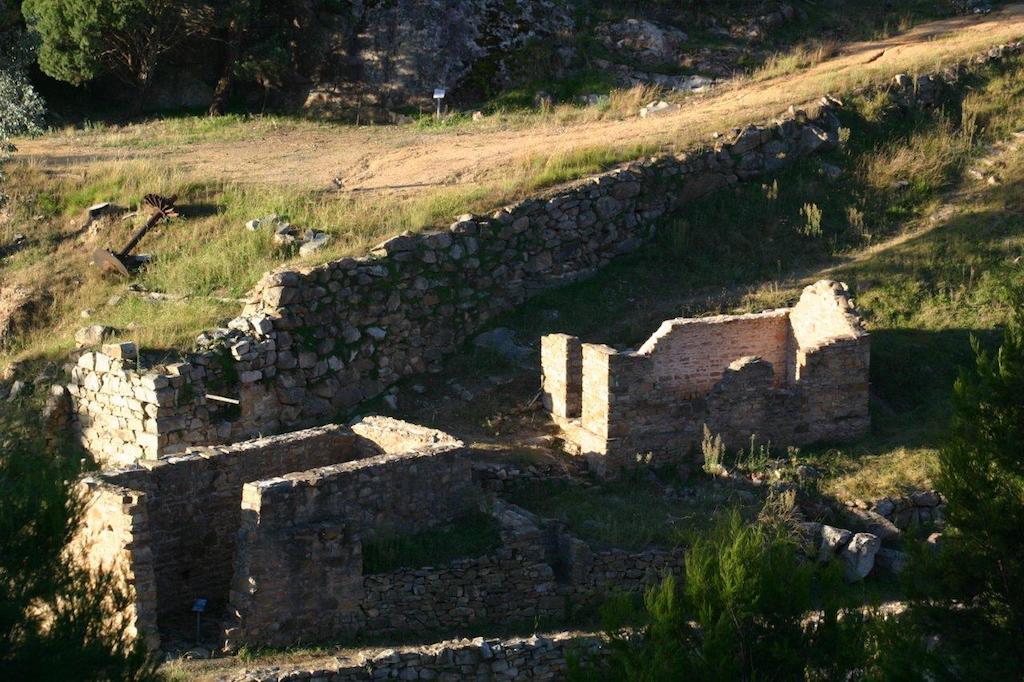 In 2006, Council renewed its interest in protecting the site, bringing Louise on board.

“We have a very experienced stonemason helping with the restorations and repairs.

“In any work that we’ve done, we’ve only used lime in the mortar.”

“We have a team of interested heritage architects and archaeologists who continue to provide help and advice when needed.

Volunteers also helped to clean the site following floods in 2009 and 2010. 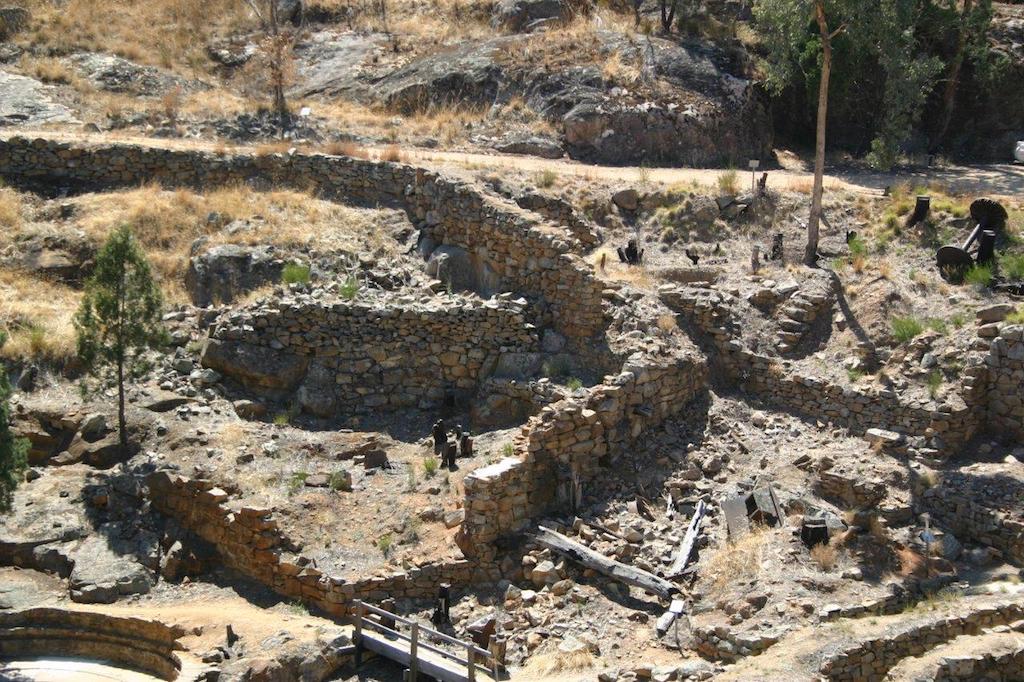 Adelong is a rich site, and the Adelong Falls’ history dates further than 130 years.

The Adelong River banks is a welcoming space.

And for tens of thousands of years, the Wiradjuri people trekked alongside it to join neighbouring nations in celebrating the bogong moths’ annual migration.

ADELONG, A HOST, PROVIDER AND MUSE

Louise also organises Ephemeral Art events. Here, artists of all ages both local and from the wider district come together to create using what the landscape provides.

“It is an interesting, all encompassing site. There is water, the heritage and an understanding of its cultural significance. I love seeing people appreciating it for what it is.