By the time Julie and David Hinds acquired it 35 years ago, this astonishing former RAAF base containing 20 WWII ammunition stores had exchanged hands three times.

“The bunkers were derelict,” says David, owner of the Possum Park caravan park.

But the Hinds imagined something quite special amongst the scrub, converting one of the bunkers into their family home in 1986.

“It was part of the Brisbane Line.”

The top-secret site ‘3CR RAAF Kowguran’ 20km north of Miles was the largest bomb and ammunition storage facility on the Line storing up to two and half thousand tonnes of explosive ammunition.

Today, Possum Park provides park patrons some of Western Darling Downs most unique accommodation. In fact soon, holidaymakers will have the opportunity to overnight in a restored Vickers Viscount airplane. 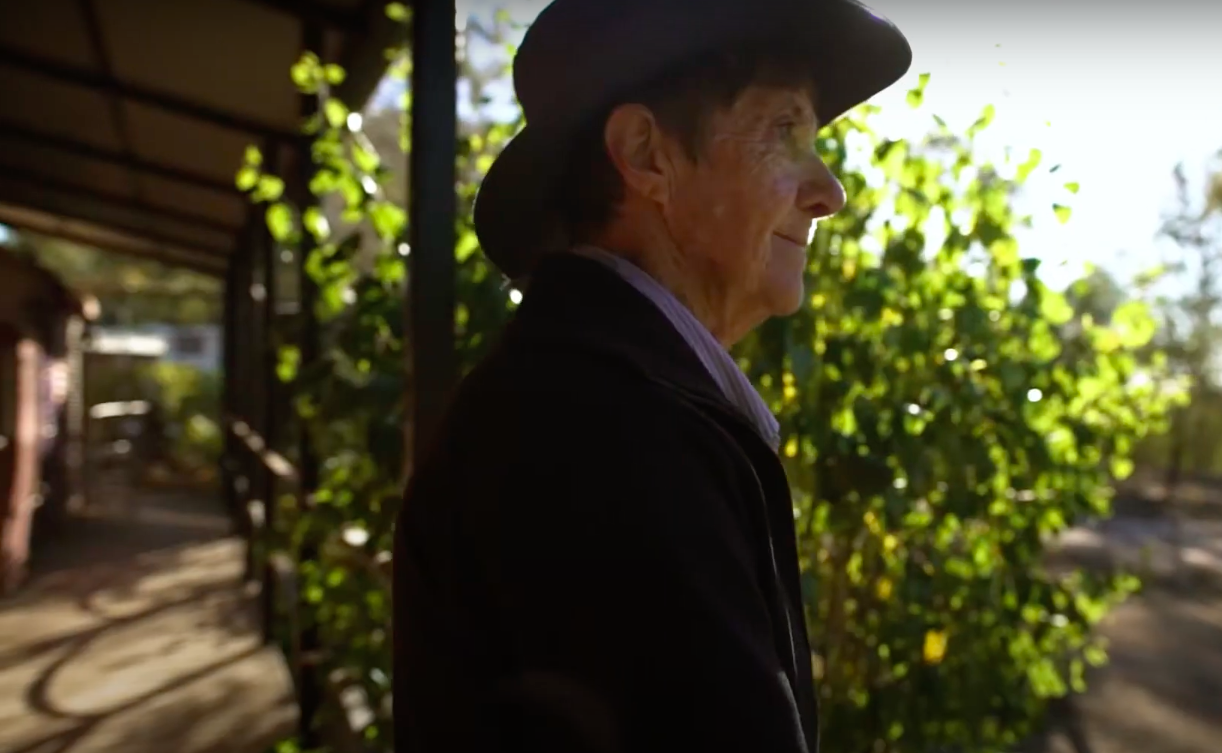 Welcoming friends spurred more bunker conversions in the late 1980s, and when word got out of these unique living history lodgings the tourism business kicked in.

“People wanted to bring their caravans [too].  So we set the caravan park up at the top of the hill.

“We basically used the RAAF administration headquarters at the top of the hill for accommodation and communal facilities.”

These early refurbishments attracted interest among service personnel linked to the site.

“In 1988, we had a reunion for a dozen WWII veterans and we’ve kept in touch with them over the years.”

Originally, the couple pored over resources such as the Australia War Memorial archives to piece together timelines but what they found paled to guests’ own histories.

“We light a campfire every night. We share our knowledge but guests often tell their own experiences.”

“People learn a lot about its history around the campfire.

“Some of it was hard to believe,” says David.

“But our subsequent research and further accounts corroborate their stories.” 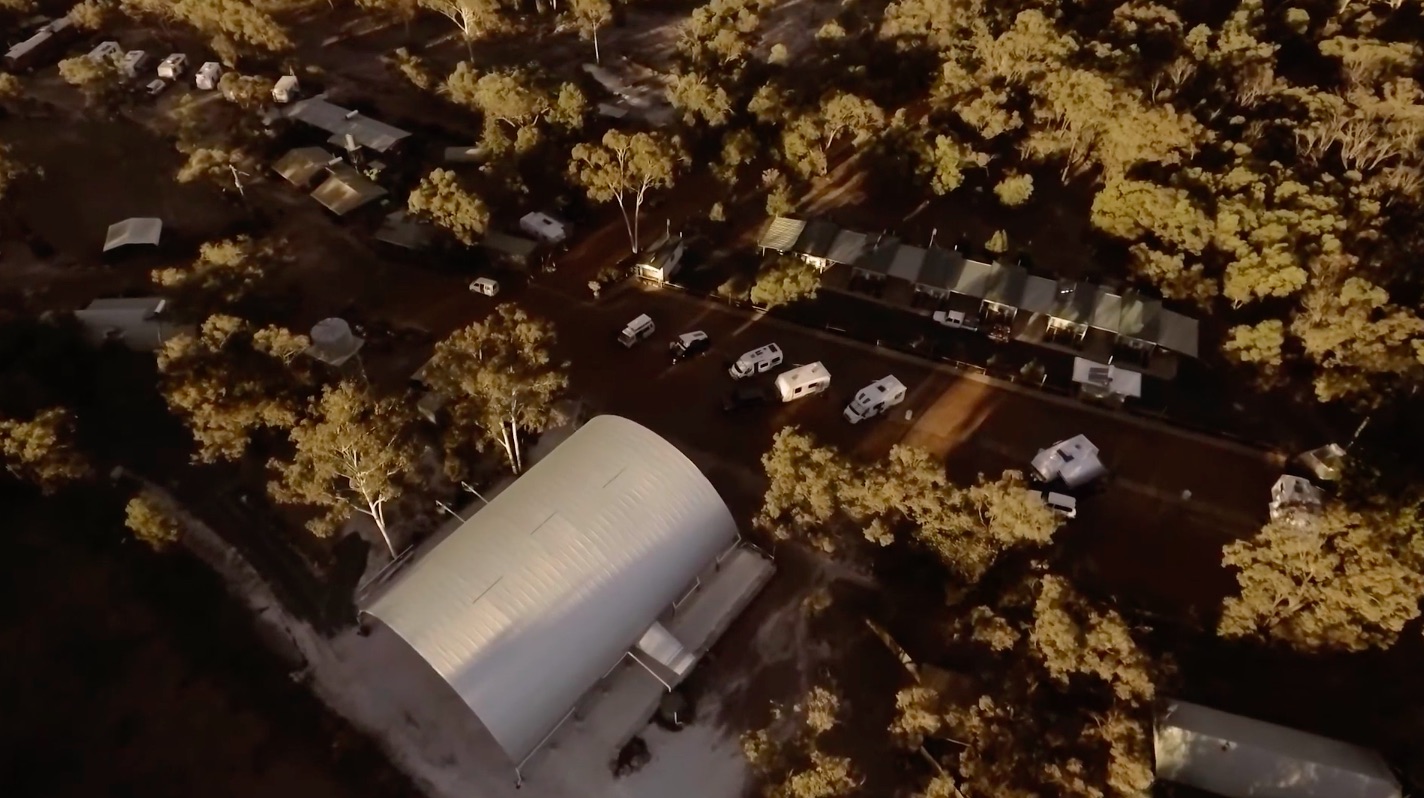 The Hinds acquired railway carriages dating back to the 1940s for accommodation in keeping with the Brisbane Line connection.

But as you walk towards a restored WWII hanger, history literally unfolds before your eyes.

Here, you’ll find another abode: a meticulous Vickers Viscount. These first flew commercially in 1948 but David understands there is a strong WWII-RAAF connection.

This one sports TAA decals. The former airline acquired a Vickers Viscount in 1954, the first of 51 in its national fleet.

“They were very popular in their day. They had turbo propeller engines.”

TAA eventually recalled and scrapped its entire superseded Vickers Viscounts. This one flew in Malaysia.

“A man in Toowoomba intended to restore it but unfortunately he passed away. Then it went through a series of owners, staying in Toowoomba for 40 years.

The couple sourced a few parts: “The wings were sold off,” says David though the fuselage was in “tidy” condition. 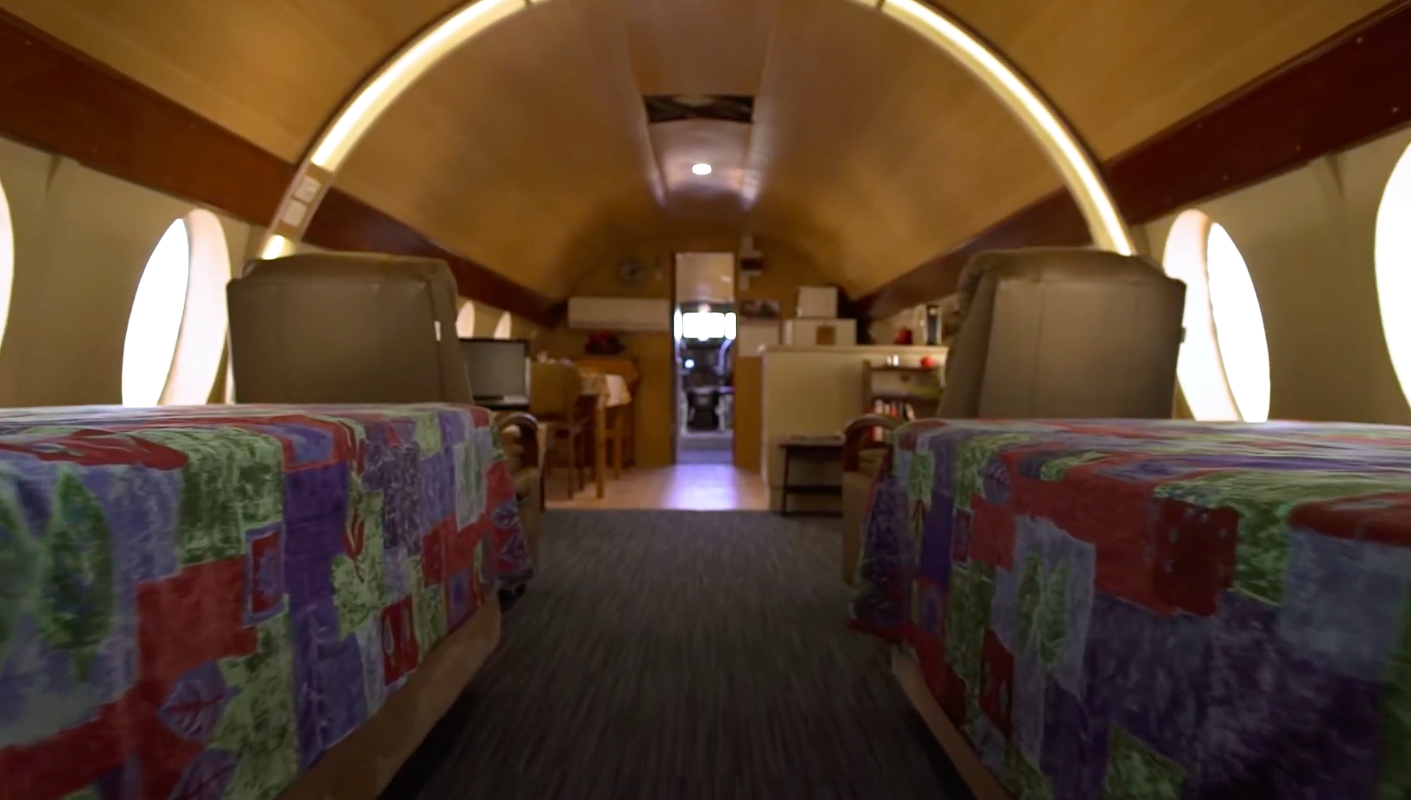 WWII HANGER, ICING ON THE CAKE

“We restored it and painted it up [to the original TAA colours] but couldn’t insure it [as it was unsheltered].

“So we found the remnants of a WWII hanger and we had to restore that too.

“It turns out it was built at Port Kembla. Lockhart Building Supplies supplied us with all the sheeting and that has really tidied it up,” David explains.

Guests can soon stay within the passenger cabin as it undergoes its finishing touches, due for completion December this year. But the cockpit remains true to its origins.

“We’ve had the seats reupholstered. Everything within the cockpit is as it was.”

We’ve done the kitchen, dining and lounge. In the bedroom and dressing room. We’re just finishing up the bathroom. We hope to finish by December. 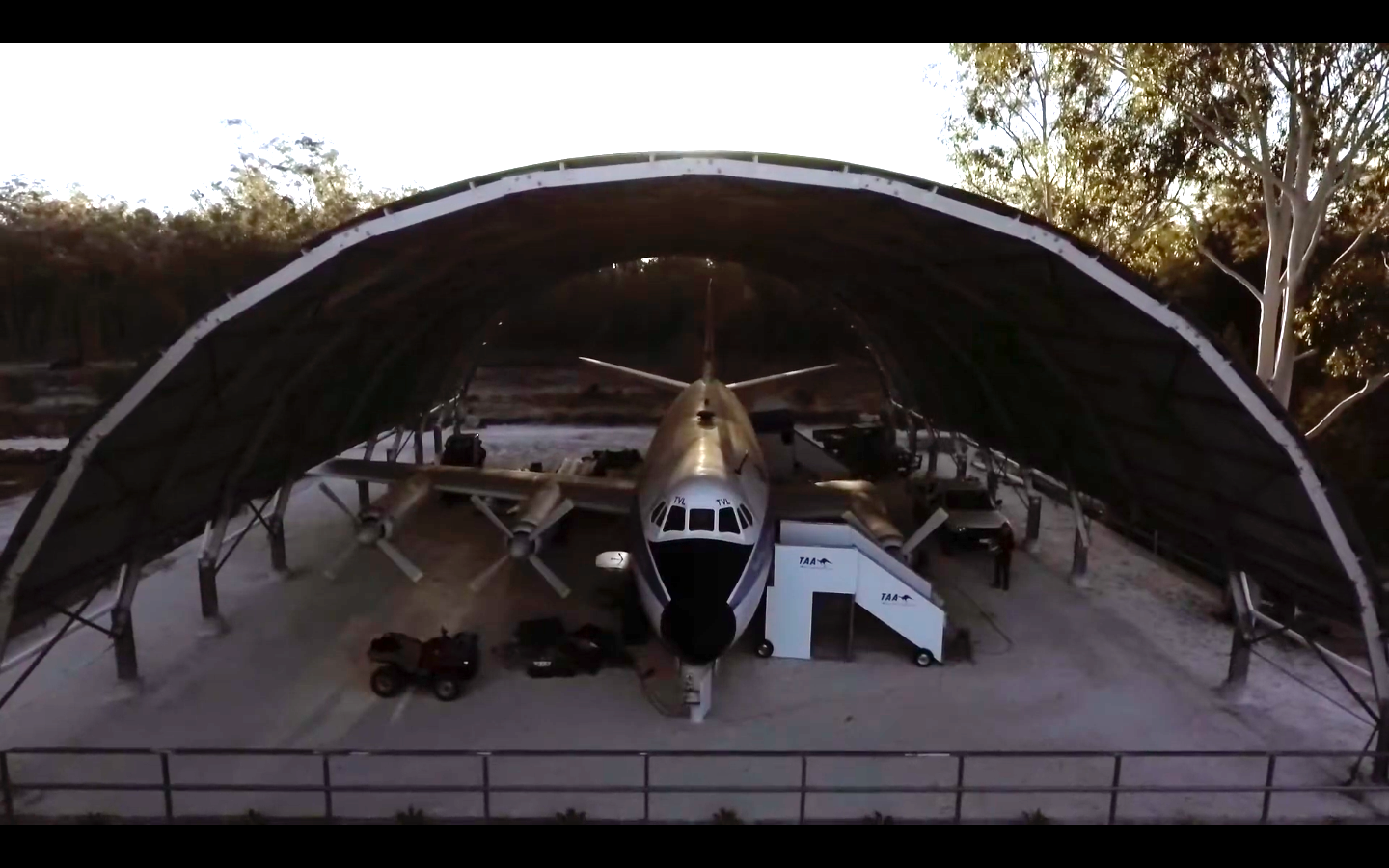 Aircraft restorations are specialist gigs. And qualified volunteers were vital in its preservation.

Indeed, the refurbishment inspired nostalgia in its restorers–with travellers bringing a diverse range of skills.

“The cockpit was in good condition but there were a lot of damaged instruments,” David explains.

One caravanner brought finesse to the helm.

“He’d had done an apprenticeship with Smiths Instruments.

“He still had a lot of those tools,” David explains. 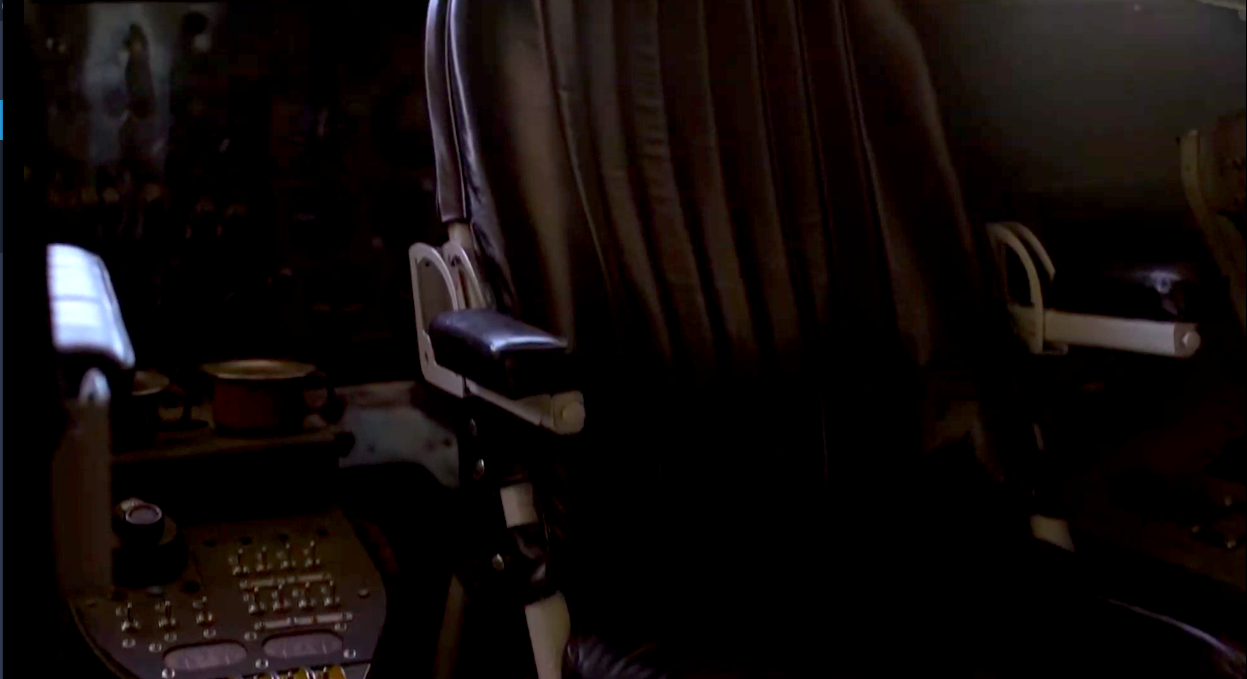 Restorers aren’t the only ones affected by the project.

This February, David welcomed a pilot who worked for Cathay Pacific, which at the time flew into Toowoomba once a week.

“He brought his family to Possum Park just to see the Vickers Viscount. He was initially from Rhodesia and used to fly one carrying freight in and out of Hong Kong early in his career.”

“Our guest hadn’t said a word to us since he’d arrived. But as we walked around the plane you could see he was interested.

“Suddenly he was right with us telling us all about the aeroplane.”