“It is pretty prominent in town.

“From one direction it is a real feature. The best impact is coming from Inglewood but you won’t miss if you’re coming in from Goondiwindi, either.”

At concept, Brightside Group’s optimistic pitch resonated with the local community grappling with the effects of the drought. 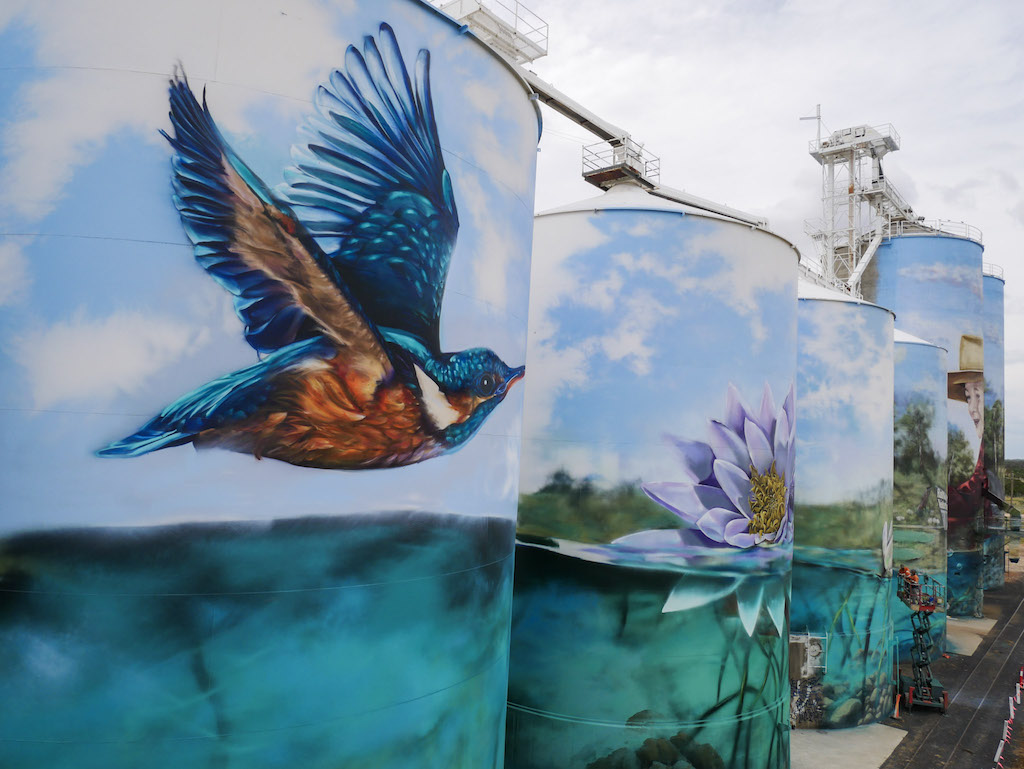 “We’re Queensland-based, so we went to the town to get a feel for it,” Jordan explains.

“[In Yelarbon] You have this tranquil lagoon against the desert setting. The pub in town is called the Oasis.”

In fact, the Yelarbon Lagoon features prominently on the GrainCorp silos, with the watermark progressively higher on each silo, till it’s lapping halfway.

At one end, where the tide is low, you see a little boy launching a folded aged newspaper boat into the lagoon.

“The boat reappears at the other end to signify this young boy’s hopes and dreams,” Jordan explains.

Three members of the Brisbane-based collective painted the eight-silo canvas in two stages.

“We’ve painted large scale murals before and were familiar with painting in front of a crowd but the scale of the silos was unlike anything I’d untaken before.”

In fact, at their highest point the silos reach 24-metres, with the Brightsiders using more than 1,000 litres of paint across 1,800m canvas.

“They’d be days where you’d see 100 people, and for a small town it is a lot of traffic,” says Jordan.

But the experience changed in the second stage, which was completed during the COVID-19 lockdown.

“It went quiet when we were there, that was interesting and surreal,” Jordan says.

“We were quite isolated–we saw the impact [of the restrictions].”

For the outback overlander, the Yelarbon Lagoon contrasts distinctly from the spinifex desert.

And travellers will often spot black swans preening themselves within its waters just 500 metres from the Yelarbon GrainCorp Silo viewing area.

In town, you can also learn about the resilient local wildlife on Desert Jewels Biodiversity Walk, a 500m signposted walk close to the Oasis Pub.

Stage two of the GrainCorp Silos at Yelarbon project was funded by the Queensland Government through the Department of Innovation and Tourism Industry Development.